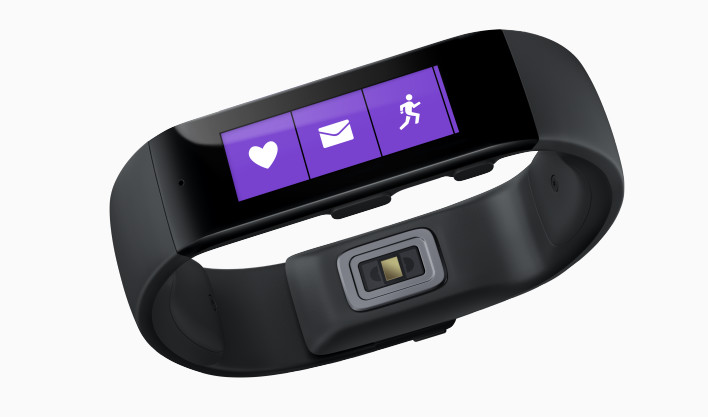 Microsoft has announced its rumored wearable device they're calling the 'Band.' The device will work on all major platforms including Windows, Windows Phone, OS X, iOS, and Android and is available Thursday with a price of $199.

So what all can the Band do? Besides the obvious things like keep track of your daily fitness goals by tracking your steps and how far you have run/walked by using standard sensors, it can also display notifications too. Microsoft says that the device can display many different types of notifications including email messages, calendar reminders, phone calls received, text messages, social updates (such as Facebook and Twitter), weather and finance.

The display has a resolution of 310px x 102px and there are 132 different background options to chose from. For those wondering about battery life: Microsoft says that it will last 48 hours on a single charge.

There are a total of 10 sensors in the device, including more unique ones that are able to track things like UV exposure. There is also a sensor that tracks a person's galvanic skin response measurement which can help identify stress.

The device certainly has some differentiating features from the current products on the market, but at $199 it's not a cheap sell either. With the device living somewhere between a smart fitness device but not a full smartwatch, the category is a bit of a blur and the market will soon let us know if this device will be a hit for Microsoft.