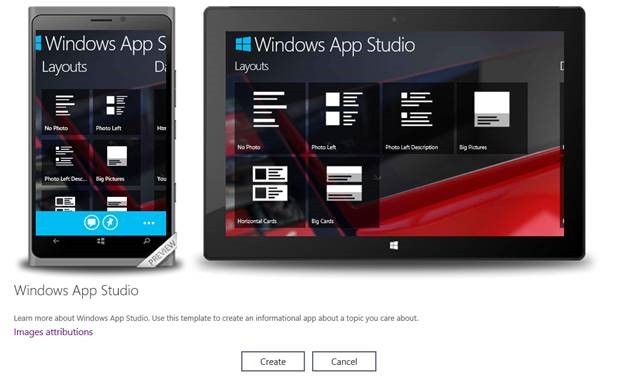 Microsoft's Windows Phone App Studio launched in beta form in August, and in February an update allowed users to make a full Microsoft Visual Studio project that contained both a Windows Phone and a Windows 8 version of the same app. This week the beta was updated yet again, this time with a new name, Windows App Studio, and a new way to make an app for both operating systems.

The Windows Phone blog says the Windows App Studio now allows users to preview how their app will look on both a smartphone and a tablet. It adds:

You can even make changes to your dynamic App Studio content hosted in the cloud and push to both Windows Phone and Windows users when they launch your app. And all from within the Windows App Studio Beta website.

The beta also has a number of new templates for people who don't want to start making apps from scratch, along with a way to create a Windows Phone app based on the content of a mobile website. Finally, the update now lets creators add a public Facebook news feed inside one of their app sections.

Microsoft says that 400,000 people have used Windows App Studio since its public beta launch but it did not offer any updates on how many published apps that used the service have been released.