Earlier this week, a rumor hit the Internet that claimed Microsoft was going to launch Windows Phone 9 in 2015, but as a complete revamp of the operating system from Windows Phone 8. Today, Microsoft's official Twitter account for the Windows Phone Design team posted some messages that humorously refuted that rumor, only to have those posts deleted. 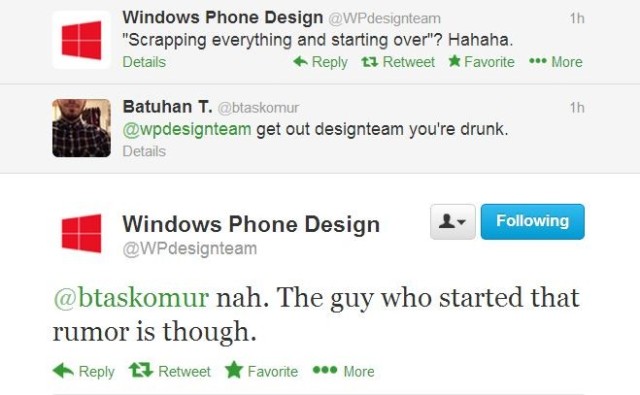 Windows Phone Central reports that one of the messages on the Twitter feed today said, "'Scrapping everything and starting over'? Hahaha." The team also offered up a couple of responses to their first message from Twitter users, saying, "don't believe everything you read" and, when asked if they were drunk said, "nah. The guy who started that rumor is though."

However, just a couple of hours later, those messages were removed from the @WPdesignteam Twitter account. It's possible that the person in charge of that feed was not authorized to make official statements from Microsoft, and as a result the messages were taken down.

In any case, it would appear that the rumors about a "page one rewrite" for Windows Phone 9 are not true. It's likely that the team will be adding and changing quite a bit to the OS over the next few years, but we will have to wait a while before we see the fruits of that labor.