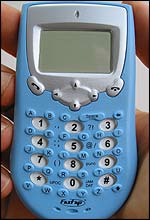 It could soon be a lot easier to tap out messages and use websites via your mobile phone. Next year could see the appearance of mobile phones that have a redesigned keypad that gives each letter and number its own key. If widely adopted, the keypad could end the need for predictive text systems in phones and mean you no longer have to tap several times to write letters in text messages.

Digit Wireless, inventors of the novel keypad, have been showing off working prototypes of their gadget in an attempt to get operators and phone makers to adopt it. The Fastap keyboard was invented by David Levy, the former head of ergonomic design at Apple. It gives each letter and number almost as much space as those on a computer keyboard. It crams 26 letters of the alphabet, the * and #, 10 numbers, plus a variety of other keys into the same space that most phones manage only to fit numerals and a couple of other keys.

Each letter sits on a raised bump and numbers are written by pressing the four letters surrounding them. The extra buttons on the pad can be used to reach specific services or for defined functions such as starting a text message.