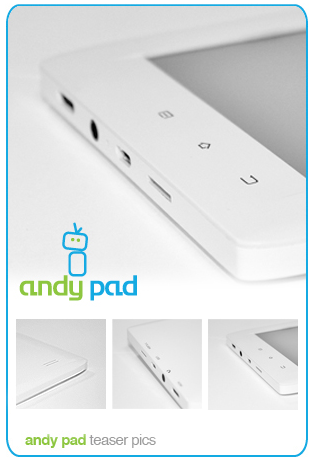 Earlier, we reported on a new Android tablet coming to the market this September. It's called the "Andy Pad" and it aims to bridge the gap between the expensive tablets, like the Motorola Xoom, and the cheaper tablets that are pretty low quality.

Whattabletpc has managed to get a lead on how the device is shaping up. Here's the specs as they currently stand, but note that they may change before the device is released -

The specifications are pretty impressive, considering the asking price is just £129. Although it may have a resistive touch screen and only 256MB of RAM, the device certainly seems to contain a fair amount of oomph to make the tradeoff worthwhile.

However, should you be set on a capacitive screen and 512MB of RAM, all is not lost, either. Although it's currently a rumour and subject to change, the Andy Pad guys are hoping to produce a slightly higher spec model, complete with capacitive screen, half a gig of RAM and a faster processor for £40 more. That gives you a pretty top-spec device for about £170.

It should be noted, though, that the Andy Pad team were quick to pop out a disclaimer shortly after the article went live -

"A lot of talk about possible AndyPad specs today. Please wait until our official announcement of further specs before jumping at rumours! ;)"

Neowin will be keeping an eye on the Andy Pad in the future, so expect to hear more news and a full review soon!