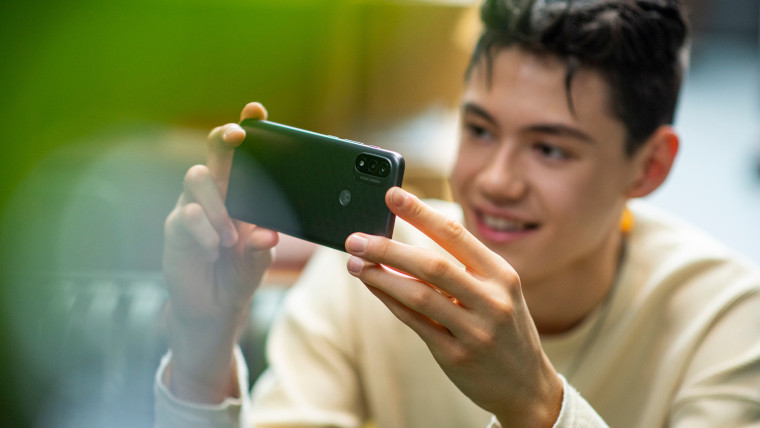 Motorola has unveiled the latest arrival in the Moto E family; the Moto E20. The product is set to arrive in select countries in Latin America, Europe, and the Middle East for €99 and is aimed at people on a budget or who might be new to smartphones. Anyone that’s looking for a new low-cost device should be aware that the Moto E20 comes with the stripped-down Android 11 Go edition operating system but this should ensure the device runs faster.

In terms of hardware, the Moto E20 packs a large 6.5” Max Vision HD+ display that promises ‘more vivid details’. The Moto E20 features a 20:9 aspect ratio which should mean you don’t have to scroll as much to see the content you’re looking at – it should also make it easier to use the phone one-handed.

The device also includes an octa-core processor, an AI dual-camera system, and a long-lasting 4000 mAh battery to give you 40 hours of battery life. It also features a fast-focusing 13 MP camera and a 2 MP depth camera to help you take better portrait shots. The front camera is 5 MP so it’s nothing groundbreaking but should do the job.

The firm’s official announcement neglected to mention the amount of RAM and storage on the Moto E20 but luckily GSM Arena has some more details. As with all low-end devices, it looks like the Moto E20 will be restrictive in terms of memory and storage. Two variants will be available; one with 32 GB storage / 2 GB RAM and another with 64 GB / 4 GB. Android 11 Go edition should help the lower-end option perform better if you can’t get your hands on the higher-spec edition.

Once available, you’ll be able to pick up the Moto E20 directly from Motorola’s website. It’s also common to see these low-cost devices in phone shops and supermarkets so keep your eyes peeled if you’d rather buy the phone offline.