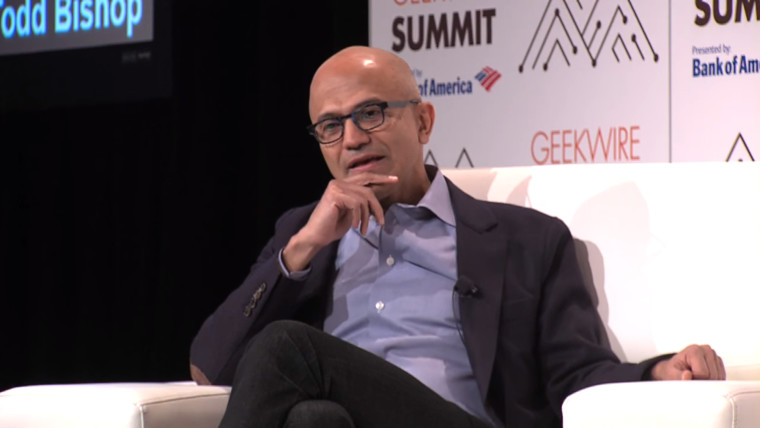 With Microsoft's explicit admission that Windows 10 Mobile is no longer a focus for the company going forward, many have wondered how the company expects to remain competitive in a global market that is increasingly mobile. When asked the same at a recent interview, CEO Satya Nadella provided some insight into the direction he is steering Microsoft in, and reiterated some of his previous elucidations in this regard.

Nadella acknowledged the fact that shipments of mobile devices greatly supersede those of PC, which is still a market segment where the company is dominant. However, in response to Google and Apple's superiority in this mobile world, Nadella explained he takes his lessons from history.

Questioning the permanence of a particular technology's dominance in the tech market, he referred to the Microsoft of yesteryear, which was one thought to be nigh invincible. He drew parallels between the subsequent success of Apple through the iPhone and the iPod and suggested that his eyes, too, are focused on the future - and hopefully a similar upending of the market by Microsoft.

What about the present, though? Nadella stressed that while the company will be looking at riding future advances into a dominant position again, for the time being, it is concentrating on simply supporting and providing all of its software to its users, regardless of what platform they may prefer.

On the subject of mobile hardware in particular, Nadella has the following to say:

We absolutely do not have the share to have our smartphone hardware, that’s a real consumer choice. That’s the reality of it. (…)The reality is that we cannot compete as a third ecosystem with no share position and attract developers.

In the meanwhile, he believes asking questions like what defines mobile devices or what the next form function change will be, and figuring out the answers to those questions first, will be Microsoft's ticket to success. He referred to the popularisation of the 2-in-1 form factor via the Surface line as a good example of this.

So, while Microsoft is throwing in the towel to Apple and Google by admitting the fight over the mobile era is lost, Nadella has his sights keenly set on the future and is hedging his bets on things like Mixed Reality and other possibly unannounced form factors to kickstart the company beyond its competition.