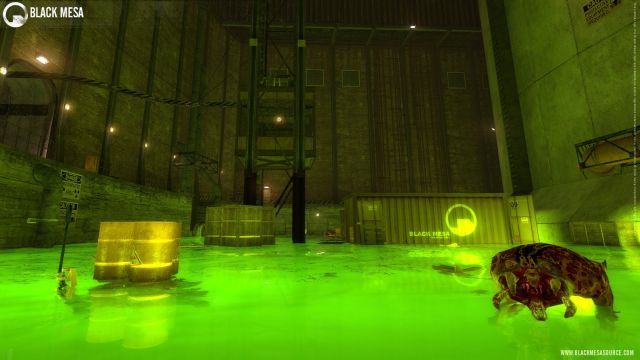 Many gamers are apparently interested in the fate of Black Mesa. This free game project has been in the works for years as a group of volunteers has been trying to recreate the entire Half-Life game from Valve with the updated Source engine. Today, the project's Facebook page released a number of new screenshots, showing off new gameplay from Black Mesa.

The screenshots were released as part of the team's promise to offer new media if their Facebook page reached the 20,000 "Like" mark. The screenshots, such as the one above, show actual gameplay from Black Mesa, including some impressive looking creature shots.

The screenshots are some of the first significant media updates for Black Mesa since the team released an impressive looking trailer way back in 2008. The trailer said that the game would be released in 2009 but that deadline came and went with no game and, more importantly, no information from the team.

Earlier this year, Rock Paper Shotgun posted an interview with Black Mesa's project lead Carlos Montero, who described the efforts that he and the team have gone through to complete the game. When asked when the final game would be completed, Montero said, "We’re working very hard to get something out to our fans in the soon-ish timeframe. I really won’t say anything more than that."