Back in November, we reported on an image purporting to be that of the first device running RIM’s next-generation BlackBerry 10 operating system. The handset, codenamed ‘London’, was based on the same design themes employed in the crazy-expensive Porsche Design P’9981 by BlackBerry device, with silver highlights and unusual angles.

Now, a new corporate slide has been leaked to CrackBerry, claiming to show the London handset, which has now had a dramatic makeover compared with the device we saw a few months back. Apparently, CrackBerry would also like us to refer to this thing as a ‘superphone’, for reasons that aren't at all clear. 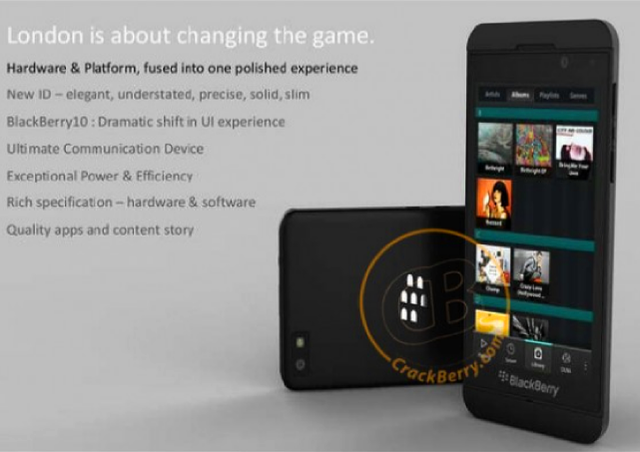 The design of the handset superphone actually appears to owe more to the BlackBerry PlayBook tablet than to the P’9981. CrackBerry claims that London is destined for the UK market, and that there are now two additional models – codenamed ‘Laguna’ and ‘Lisbon’ – that are headed for AT&T, Verizon and Sprint in the US, although these may simply be localised or network-specific variants of the same device, rather than completely different and distinct models.

The slide itself tells us that “London is about changing the game”, with an emphasis on a unified and more polished hardware and software experience. Claiming that it’s the “ultimate communication device”, RIM clearly isn’t afraid to raise expectations, but given how poorly the company and its products have performed in recent months, that seems like a very dangerous game to play.

The hardware design is reasonably attractive, and the render appears to show a device that’s very sleek and slender, which corresponds with what we’ve previously heard about this thing being thinner than an iPhone. It’s claimed that RIM is testing 1.5GHz dual-core processors from both TI and Qualcomm; this also matches a previous report, which additionally indicated that London will have 1GB of RAM and 16GB of storage, with an 8MP rear camera with flash, and a 2MP front-facing cam, which can be seen in the slide above.

The screenshot on the device looks nice enough, previewing a reasonably attractive and uncluttered look for the BlackBerry 10 operating system, which we’re promised will provide a “dramatic shift in UI experience”.

Of course, this is all very nice - but we’re still many, many months from seeing this device on the market. Between now and then, RIM will keep churning out more BlackBerry 7 handsets, and probably make more awful business decisions, stumble into another PR disaster of some kind, and subject us to more terrible marketing efforts like the BlackBerry “Bold Team” of cartoon superheroes.