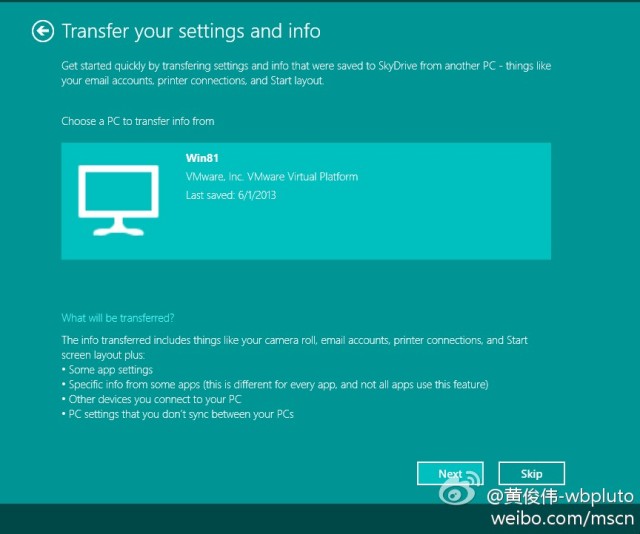 Over the weekend, a set of screenshots from Microsoft's pre-release 9415 build of Windows 8.1 made their way to the Internet. The screenshots didn't show much in the way of new features but now yet another screenshot, allegedly from the new Windows 8.1 build 9418, does indicate it will have an updated option to transfer settings from one PC to another.

The screenshot comes from an account on the Chinese Weibo social network (registration required). It shows a menu selection for a wizard that will allow users to transfer settings and features that have been saved on a user's SkyDrive account. Some of the things listed in the screenshot that can be transfered are some app settings, email accounts, printer connections and the Windows 8.1 Start screen layout.

The menu selection also says that some info from Windows 8.1 apps can also be moved from one PC to another with this method, but this won't be available for all apps. Other connected PC devices and settings that don't sync up between the two PCs can also be transferred with this new option.

Assuming this screenshot is not faked, it looks like Microsoft is putting in a new and easier way to help transfer settings to a new PC with the Windows 8.1 upgrade. We should know for certain when the preview version is released via the Windows Store in late June.