As the holiday shopping season gets into high gear, there will likely be a lot of technology products that will be bought and given to others. Nielsen decided to conduct a survey of both US children and adults to see what gadgets they most wanted to buy over the next six months. 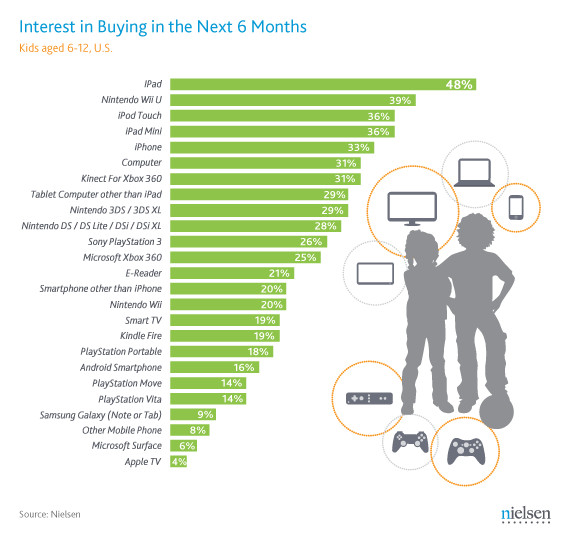 Among kids that were between the ages of six to 12, the survey indicated that 48 percent of them wanted the full size iPad. The new Nintendo Wii U console came in second on the "want" list for kids with 39 percent, followed by the iPod Touch and the iPad mini at 36 percent each. The Surface tablet from Microsoft was near the bottom of the list at six percent.

In the second survey group, with people that were 13 years old and older, the full iPad came out on top again with 21 percent. Some kind of computer was next on the list at 19 percent, followed by any tablet other than the iPad at 18 percent. The Wii U was next at 17 percent and the iPhone was fifth at 14 percent. Microsoft's Surface is near the bottom at three percent.

While it's not surprising to see the iPad on tops of both lists, the fact that the Surface is much lower in this survey could be a sign to Microsoft that demand for the new tablet could be lower than expected.