Android has been a platform that allows its users to pirate applications relatively easily up until now, with users able to install licensed, pay applications if they can get a copy of the "apk" installer files for the program, and know how to install the applications themselves -- there is little to no copyright protection in many of the applications available today.

Today, Google announced an initiative to combat this, simply called the "Licensing Service for Android Applications" which is free for Android Developers to use. The platform supports anywhere from Android 1.5 up, and "provides a secure mechanism to manage access to all Android Market paid applications."

The system works by allowing the application to query the Android market's licensing server, and return information based on whether or not the application is licensed for use for the current user based on sales records. According to the blog post, the service operates in real time over the network -- Wifi, EDGE, 3G or GPRS and "provides more flexibility in choosing license-enforcement strategies, and a more secure approach in protecting your applications from unauthorized use, than copy protection." 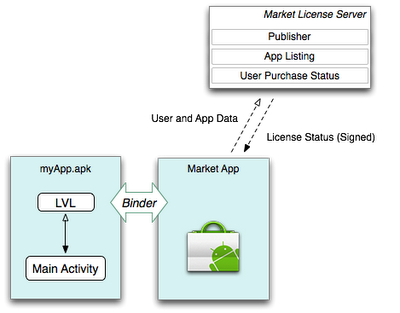 It seems like the change is a bad move for users who do not have an "always on" unlimited data plan on their phone, or are not frequently using Wifi. There are no details on if the applications will be crippled when offline, similar to the DRM behaviour found in popular games such as Assasins Creed II, but the move is in favour of those developers and customers who are legitimately purchasing Android applications.