As the technology industry prepares for the adoption of USB 3.0 (in anticipation of the increased speeds), Intel has been hard at work on technology that will be far faster. In fact, it is capable of transferring the entire printed catalog of material within the Library of Congress in only a minute and a half. The technology makes use of silicon and light to achieve this incredible feat.

According to Gizmodo via Intel Tech Research, “Intel detailed their breakthrough to the press at an event today, marking the milestone of impressive 50 gigabits per second transfer speeds using an underlying technology that could go much, much further. We've covered the promise of fiber optic speeds before, but nothing like this. Intel CTO Justin Rattner explained just what "silicon photonics" even means, why the world needs it, and what it promises in the near future.” 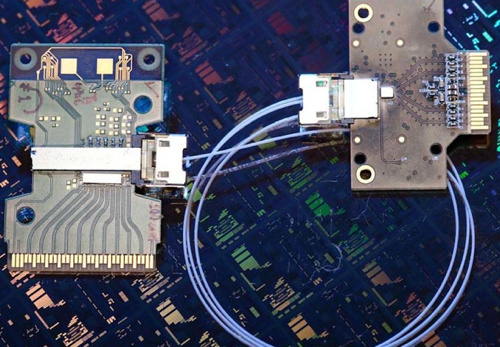 Silicon photonics may sound something out of a science fiction story, but it is nothing more than the combination of silicon and optical technologies. Because of the fact that it uses existing technology, Silicon photonics can be made very affordable. This technology works by converting electrons into photons and back again. Once the photons become electrons, the electronics work the same way that they have since their invention (using electrical current to flip transistors on or off – thus resulting in digital 0’s and 1’s).

What makes this technology even more impressive is the process of encoding data into laser streams on wiring that is on the same size scale as your fingernail. During the process, the streams converge and move along a fiber optic strand. When they arrive at their destination, they get decoded back to electrons.

This technology may seem like overkill, but imagine the future when more and more data needs transferred back and forth. Every aspect of our lives is becoming more and more digitized and only so much of that data can be managed at one time on existing technology. As we approach the area of 10 gigabit per second speeds, copper wiring becomes useless. The quality of the data that is transferred over the copper is degraded beyond usefulness.

However, the speed of light is the fastest speed currently known to physics and Intel can use this to an advantage. As it stands now, they can already transfer an entire movie or 100 hours of music in one second. If they manage to hit their theoretical 1 terabit per second limit, it would be possible to backup an entire hard drive in that same timeframe (one second). It may be a while before we see this technology, but the potential is game changing.