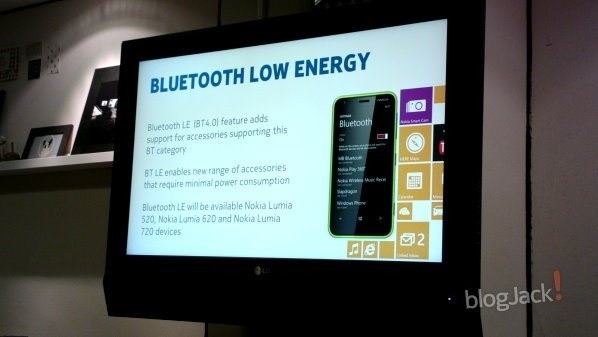 A leaked slide detailing some of the improvements coming to Nokia's impending Amber update for their Lumia Windows Phones has revealed that Bluetooth 4.0 support is coming to some devices with the update. According to BlockJack!'s slide, the Nokia Lumia 720, Lumia 620 and Lumia 520 will all be receiving Bluetooth 4.0 drivers with the Amber update, alongside other features such as FM radio support.

The Qualcomm Snapdragon MSM8227 chipset that powers these devices has the necessary connectivity for Bluetooth 4.0, but Nokia and Microsoft have taken their time to develop the drivers for the low-energy technology that is necessary for full support, which is why these devices currently only support Bluetooth 3.0. With the Amber update reportedly bringing Bluetooth 4.0 support, you'll be able to connect your smartphone to various low-energy accessories such as the Fitbit and smart watches.

While this information originates from a recent press conference in Hong Kong, it's not clear when the Amber update will be made available to the public, although we have been hearing rumors for a few months so we imagine it's not too far away.