Nokia recently unveiled its NetGuard Security Management Center software, a tool that aims to help service providers detect and protect systems from the growing threat of ransomware and other malicious programs. And as part of this initiative, the company has also published its 2017 Threat Intelligence Report, which takes a look at the behavior of malware in network communications. 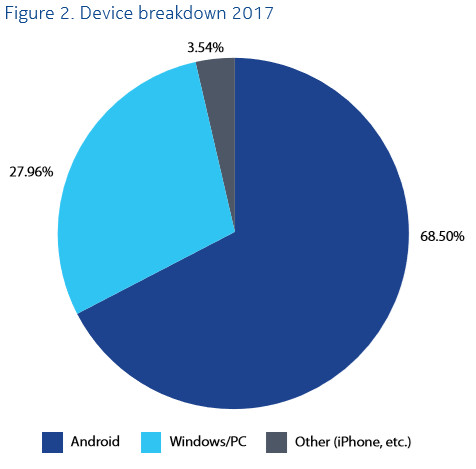 In the smartphone sector, the vast majority of malware is currently distributed as Trojanized applications. The user is tricked by phishing, advertising, or other social engineering into downloading and installing the application. The main reason that the Android platform is targeted, is the fact that, once side-loading is enabled, Android applications can be downloaded from just about anywhere.

The platform also records a monthly infection rate of 0.94 percent. It is further emphasized that despite Google's efforts to prevent malware from reaching users' phones, rogue apps can be installed from text messages and emails. The existence of third-party stores plays a significant part as well, with these being more popular compared to the official app store like in China.

Windows covers a smaller chunk of the pie, with only 28 percent of malware infections observed. Nokia acknowledges that the infection rates of Windows devices over smartphones will ultimately shift to the latter, as it is now becoming the preferred method of accessing the internet.

iOS and other devices cover a measly 3.54 percent of infections.

The intelligence report also makes mention of the WannaCry fiasco. According to the company's findings, the outbreak was responsible for the largest ransomware attacks of all time, infecting over 230,000 computers in 150 countries. "The impact of WannaCry could have been much larger, had it not been for the discovery of a DNS 'kill switch,' that effectively shut down the malware and prevented it from spreading," the company stated.

You can download the full report for more information here.

All things considered, as mobile devices are becoming the more popular way of communicating these days, it helps to know how to stay away from infections in the future. Avoiding opening links from suspicious emails, utilizing good antivirus software, and keeping a backup of your important files can already go a long way in the fight against malware.