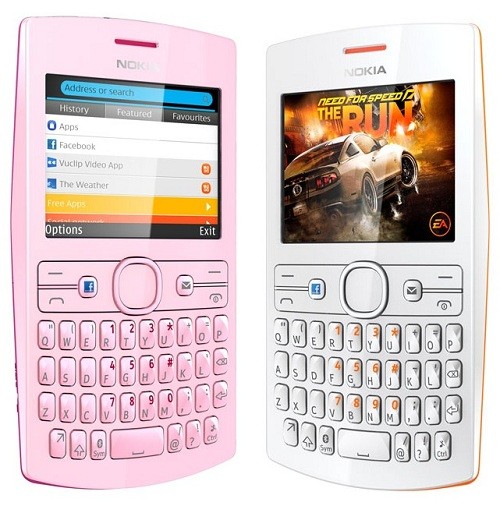 The Asha 205, Magenta on the left and Orange on the right

Nokia aren’t just focusing on the Lumia range of Windows Phone handsets. They still product slightly less smart smartphones for the more budget conscious consumer. So today, the company has decided to lift the lid on its latest handset; the Asha 205.

Calling it “our most Social Nokia Asha phone to date,” Nokia are pulling out all the stops to convince consumers that they make relevant phones outside of the Lumia range. The inclusion of a QWERTY keyboard and a dedicated Facebook button make the device quick and easy to use for social networking.

A new sharing technology called ‘Slam’ is being introduced with the new handsets. This new tech will allow you to share, for example, an image via Bluetooth to Bluetooth enabled devices in range. The difference is that the shared image can be transferred without the receiving device being paired to the Asha that the ‘Slam’ was instigated. You can also share vial social networks and email.

The new version of the Nokia Xpress Browser will use cloud servers to reduce data volumes, therefore usage and bills, by 90%. While the phone doesn’t have GPS, Nokia Nearby will allow the phone to find nearby places – like restaurants, venues, etc. – using cell-tower co-ordination to pinpoint a user’s location. The Nokia Nearby app shares same database of locations as Nokia Maps.

With Facebook, Twitter and eBuddy apps preinstalled out of the box, an EA game gift pack containing 40 free premium games available to download and keep, and 1000s of free and paid apps available from the Nokia Store, users won’t be short of an app or two! In certain markets, the phone will also ship with Nokia Life or Nokia Life+.

Lastly, a dual-SIM edition of the phone will be available. Making use of Nokia’s unique Easy Swap technology, you can swap one of the SIMs, through a slot on the side, without having to power the phone off. The phone also remembers the settings for up to five different SIM cards.

With the budget conscious in mind, the Asha 205 is available this quarter, without any operator subsidies and local taxes, costing around $62.