Imagine this: Microsoft releases a new mobile platform and when it comes to bringing their popular messaging client to the platform, they outsource the coding to someone else. Sound strange? Well, it gets even more interesting. This real life scenario leaves us with a version of Windows Live Messenger that’s actually titled “Messenger by Miyowa,” although I’d speculate that Microsoft won’t let their flagship messaging application go to market with that name. 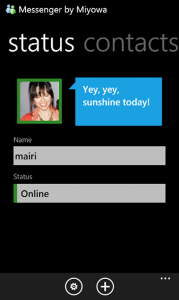 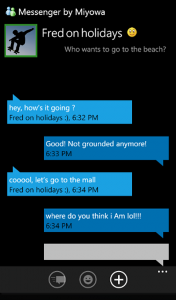 On their blog (via WMPoweruser.com), Miyowa discusses briefly that their 250-man (no women?) software company has already produced the Messenger clients for various other platforms, although it's unknown if this list includes iOS and Android. Miyowa also states that it’ll be releasing WP7 applications for other social networks (including Facebook and Twitter) in the marketplace. While this is good news for those that want nice looking and functional applications for their shiny new WP7 devices, one has to wonder why Microsoft couldn’t code this application themselves, especially given the simplicity of coding within Silverlight. It could be that Microsoft's Windows Live team have been too busy working on the recent Windows Live Essentials 2011 release, although you’d think that getting all core Microsoft content and services onto WP7 would have been a priority from day one.

The application is expected to be available for free on the marketplace at launch.