Last week, Mozilla announced that it had appointed Brendan Eich, creator of JavaScript, as its new chief executive officer. But dark clouds quickly began to gather over the company in the wake of that appointment, as many of Mozilla's own staff very publicly called on their new CEO to step down just a few days later.

The reason for their outrage? Eich donated money to a campaign that supported Proposition 8 in California in 2008, which succeeded in banning same-sex marriage there, until the legislation was overturned in 2013. Some Mozilla employees have found it hard to accept that a person who would support such a campaign is now in charge of their company. Some developers, too, have spoken up against Eich, with some even pulling their software from Mozilla's Firefox Marketplace, and turning their backs on the company.

The storm of controversy surrounding his appointment worsened a few days ago, when half of Mozilla's board resigned, citing doubts over his ability to realise the company's goals, particularly with regards to Firefox OS and the mobile market. While Eich's views surrounding same-sex marriage were not the key motivation for the resignation of those board members, the fallout regarding his stance on gay rights continues.

Today, dating website OkCupid posted a special message for those connecting to the site via Mozilla's Firefox browser. The message says that "Mozilla's new CEO, Brendan Eich, is an opponent of equal rights for gay couples. We would therefore prefer that our users not use Mozilla software to access OkCupid." 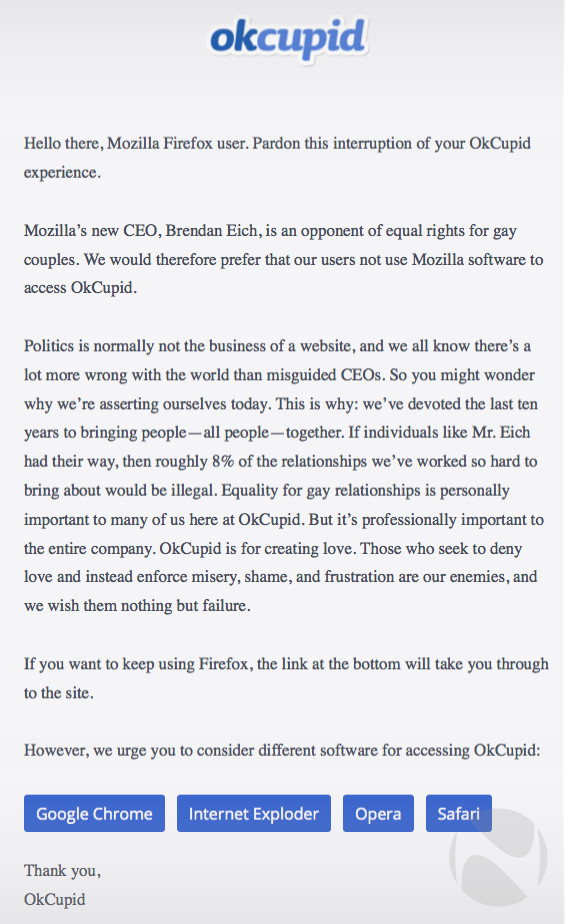 It goes on to say: "Those who seek to deny love and instead enforce misery, shame, and frustration are our enemies, and we wish them nothing but failure."

The message ends by encouraging users to use an alternative browser - Google Chrome, Opera, Safari, and the unfortunately named 'Internet Exploder'.

So far, only OkCupid.com has featured the message, but the company is owned by IAC/InterActiveCorp - an American online media giant, which owns many major web brands, such as Ask.com, About.com, Dictionary.com, CollegeHumor, Urbanspoon and Vimeo, along with fellow dating brands Match.com and the app, Tinder.

In the face of opposition from many of its users, its developers and even its own staff, after the resignation of half of its board members, and now, as a large third-party company calls on its users to boycott Mozilla's products, one might easily assume that Mozilla is feeling some pressure to push Eich out of the nearest door. But there are no signs that the company is backing down on its choice. In a statement published by The Verge, Mozilla responded to OkCupid's message, saying:

Mozilla supports equality for all, including marriage equality for LGBT [lesbian, gay, bisexual and transgender] couples. No matter who you are or who you love, everyone deserves the same rights and to be treated equally. OKcupid never reached out to us to let us know of their intentions, nor to confirm facts."

Whether Eich can continue to weather the storm is anyone's guess - but by any measure, this past week hasn't been a good start for the new CEO.

Source: The Verge | Rainbow flag image shown is a mock-up and not an official Mozilla photo