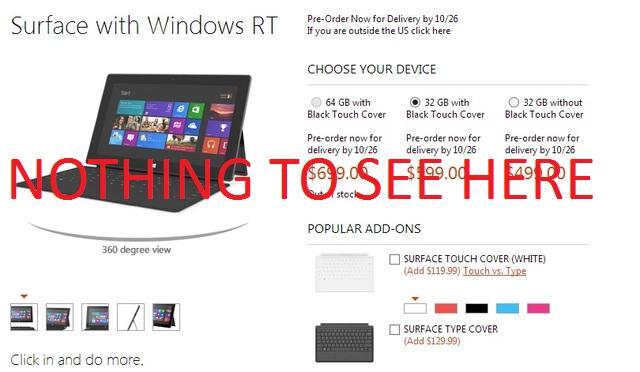 Earlier today, Microsoft accidentally pushed live the Surface pricing page but then quickly realized its mistake and hid the page. This was surely an honest mistake and the page was not supposed to go live until a later point in time but unfortunately for the individual who made the mistake, the Internet is quick to notice these kinds of things and this was surely a large gaffe by the Microsoft website team.

Now, while the pricing is likely locked in at the points pushed out earlier today, it is fun to do a little speculation and drum up a few conspiracy theories. What if Microsoft knew that if they pushed out a pricing page with inflated prices this morning, knowing that the Internet would spot this mistake, but later in the day pushed out the real pages with lower price points? It would create an instant, "$499 was a good price point but dang, $399 is a heck of a lot better" reaction from consumers.

While we doubt that Microsoft would play with our hearts like this, it would be an interesting PR move to generate a lot of noise in a very short time frame  We do suspect the prices pushed earlier are accurate and do not think Microsoft would intentionally use such a tactic, but hey, anything is possible.

While we wait for the page to go live once again, are you happy with the leaked price points or do you think Microsoft overshot its market?

Update: Microsoft has now released a press release officially announcing the prices, confirming the original pricing we saw. The website to pre-order will be made available shortly.