We suppose it’s not quite as bad as AVG trying to scour Rickroll from the internet, but Microsoft has stepped into a bit of a DMCA scandal itself. They’ve apparently been relying on automated programs to help track down pirated software and send out takedown requests to Google, but apparently the automated process isn’t quite up to speed, since it’s been trying to block Wikipedia, the BBC, and even the EPA for supposedly offering bootlegged Windows 8 betas.

The astute detectives over at TorrentFreak uncovered a number of bogus takedown requests from Microsoft at Chilling Effects, a database of cease and desist notices used by Google to disclose all of the takedown requests they receive. Now, the truth is that the vast majority of Microsoft’s takedown requests are legit, but buried amongst them are some rather bizarre assertions of piracy from US Government agencies and even the BBC. Hell, they even tried to have Bing blocked once. 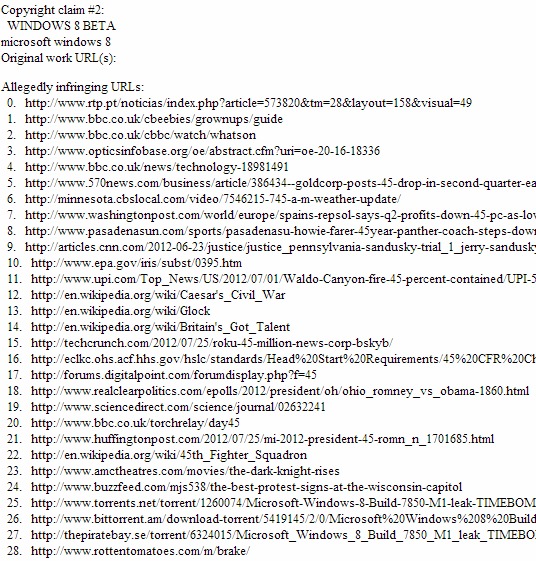 The really bad part is that a couple of the takedown requests actually went through, and that they’re still in effect. A link to AMC Theaters promoting The Dark Knight Rises was targeted, and it’s still missing in action. Of course, AMC wasn’t actually offering a pirated beta copy of Windows 8 – TorrentFreak suggests that a software glitch caused Microsoft’s automated takedown processes to target websites that contain the number ’45,’ since it looks like that’s the only common element between all of the legitimate sites.

So, while it’s good to know that all of this was caused by a computer screw up, rather than total human incompetence, we really hope that Microsoft takes a look at their automated takedown systems and tries to figure out what’s causing it to make bogus requests. You could argue that no real damage was done, but it’s the principle of (potentially) blocking an innocent website, and maybe even hurting their business. It just doesn’t look good, guys.