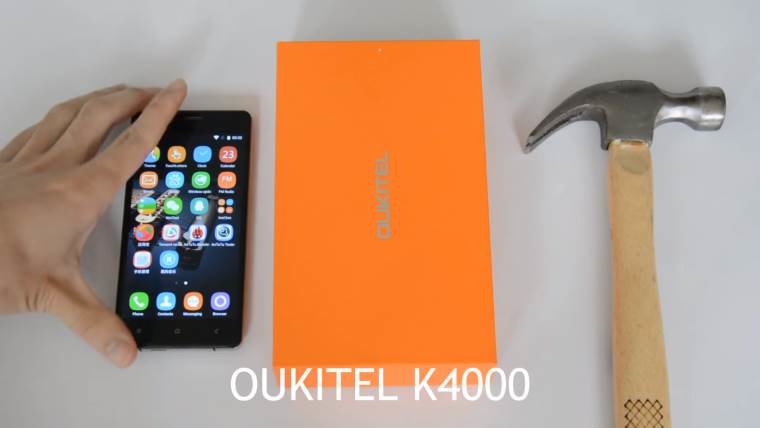 Chinese manufacturer Oukitel has blasted onto the scene in recent times with its efforts to penetrate the smartphone market outside of its home country. Armed with several different smartphones variants already available to (pre)order, its latest offering - which has yet to see a shipping date and pricing, or a full spec list - has been shown off in a couple of videos to prove how tough it is.

If you thought smartphones were easily damaged, look again, because these days it's all about toughness (if you can excuse Bendgate) and Gorilla Glass-style screen protection that protects your device against loose coins and keys that might be jumbling around in the same pocket.

As the above video shows, it can take quite a beating. Oukitel reached out to Neowin stating that the K4000 (cleverly named for its 4000mAh battery) can handle up to "800MPa stress value,"

With up to 9H hardness and more than 800MPa stress value, the screen can mitigate shock effectively and against sharp scratch.

And if that doesn't convince you enough, watch someone else bash it with a hammer, and run over with a car.

Oukitel has claimed on their website that the K4000 will last up to seven days with normal use, and three days heavy use on one charge. Of course, all of this will have to be verified and tested by a third party, and we have reached out to Oukitel asking about the K4000's other features and will update when we hear back.

Oukitel declined to comment on pricing and availability ahead of its September 10 reveal.