As the world becomes more mobile, it's clear that many people prefer tablets and laptops to the traditional desktop. That said, although some are predicting the death of the desktop, chances are they'll never go away completely, so the question becomes: Do you want a large, powerful gaming machine, or do you want a small, compact, general purpose machine?

If you're looking for the latter, HP has a machine for you. Dubbed the HP EliteDesk 800 Desktop Mini (just rolls off the tongue, doesn't it?), the computer is in a tiny form factor, not much larger than a standard cable modem or home network switch.

The great thing about this machine is that, due to its size, it can be used practically anywhere. HP said some of the target markets for the EliteDesk 800 Desktop Mini are hospital crash carts and school computer labs, but a case could be made to use the device as an inconspicuous home theater PC, or mounted under a cabinet in a kitchen if needed as well.

The power supply is housed externally, and is your typical power brick that plugs into the back of the desktop and into the wall.

As with most other HP products, the Desktop Mini can be configured in different ways, depending on individual need: For example, WiFi and Bluetooth are both optional. The machine also comes with either an SSD or a "spinning rust" drive, and while an internal optical drive is not an option, the PC has six USB ports, so one can easily be connected if needed, although this partially negates the advantage of the form factor. 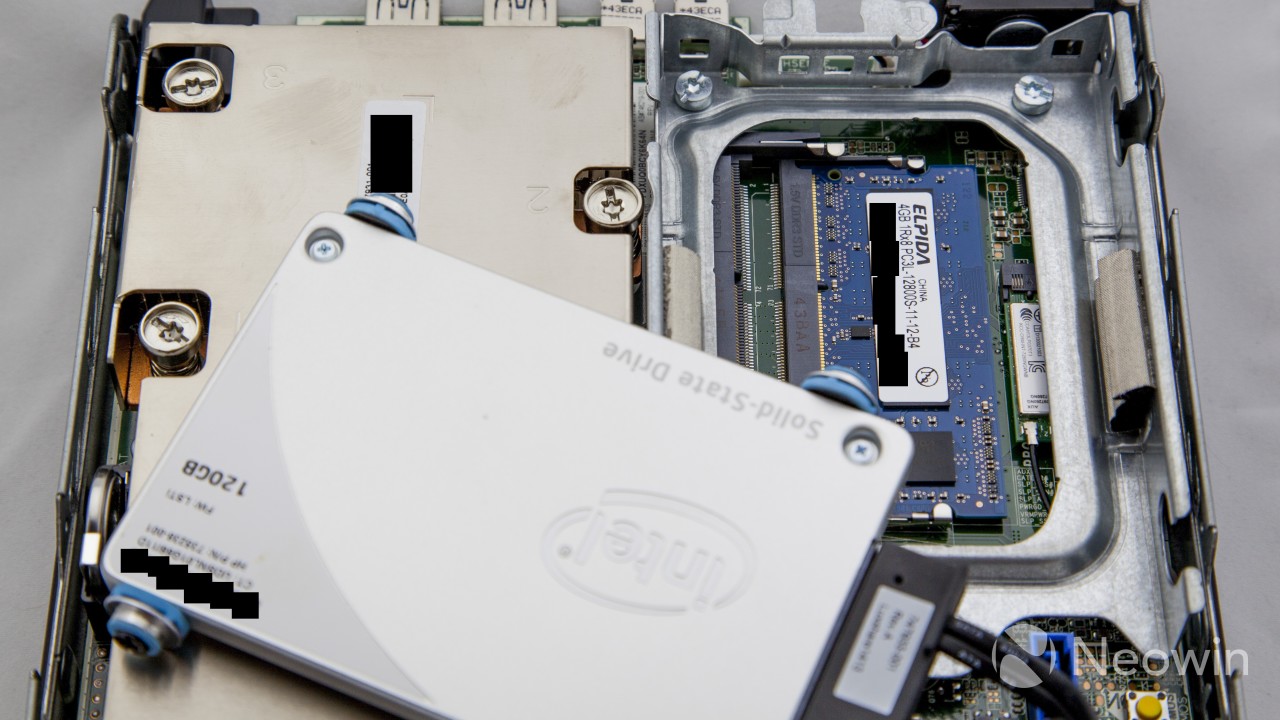 Our review unit came equipped with an Intel Core i5 4570T quad core processor, and a single 4GB DDR3 memory module running at 800MHz, but the device supports a wide range of CPUs, from a Pentium G3220T, a wide array of i3 processors, all the way up to the i7 4785T. It also has two DIMM slots, so is capable of supporting up to 16GB of RAM.

Since the HP EliteDesk 800 Desktop Mini is not a gaming PC, the machine uses Intel HD Graphics 4600. While fine for general work, you won't be playing Far Cry 4 at maximum settings anytime soon.

The front of the EliteDesk Mini consists of a headphone and microphone port, useful if you want to use the box for Skype or Lync Skype for Business. There's also two USB 3.0 ports, a small speaker, and of course, the power button. 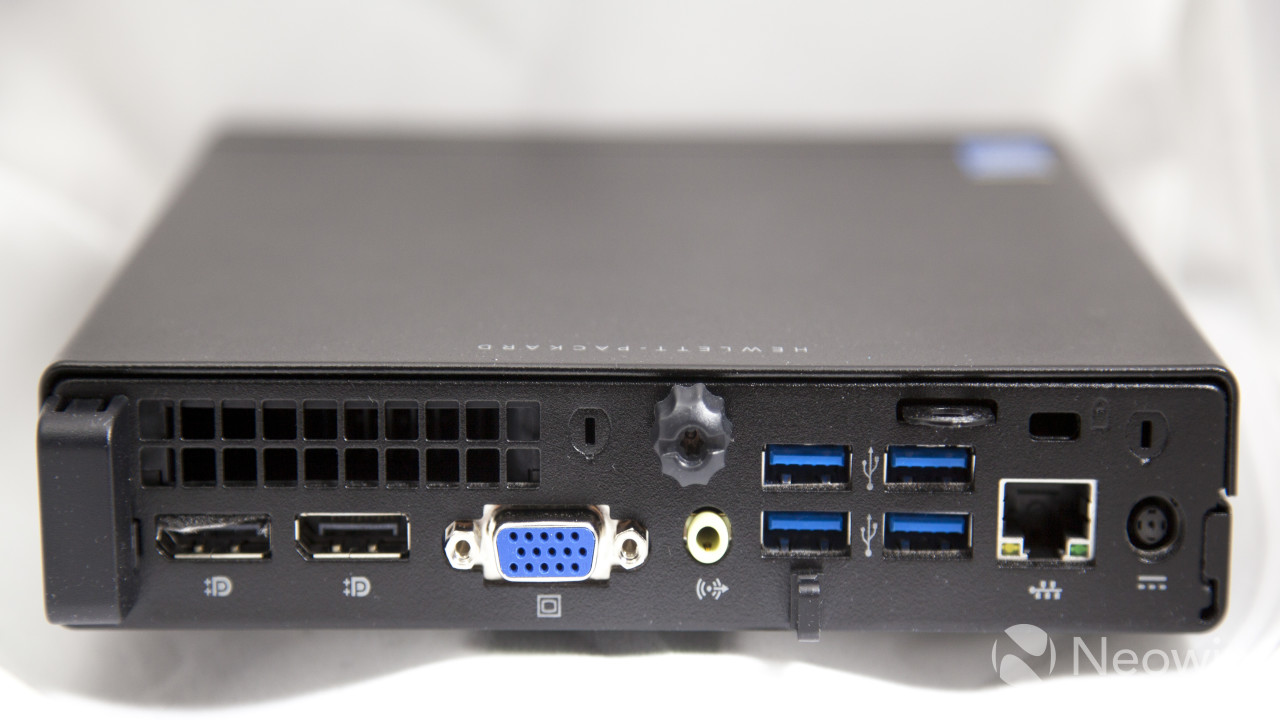 The back of the box is where the action is. HP included four more USB 3.0 ports, two of which you'll probably want to use for a mouse/keyboard combination, a gigabit Ethernet port, a speaker port, two DisplayPort connections and a legacy VGA connector. This is also where the fan exhaust lives, as well as two ways to physically lock the device, and a simple thumbscrew to get to the inside of the machine.

As they did with the EliteBook Folio 1040 G1, HP has once again confused matters by shipping the device standard with Windows 7, while proudly displaying a Windows Pro 8 sticker on the bottom of the machine. And just as with the EliteBook, they once again included Windows DVDs so that users can install Windows 8 themselves, although they provide no optical drive to do so. While I understand that the device is mainly targeted at the enterprise market, I hope that HP follows Dell's lead by providing USB thumbdrives at some point in the very near future.

That said, all of my tests were run using the provided version of Windows 7, updated with all of the latest patches and service packs. 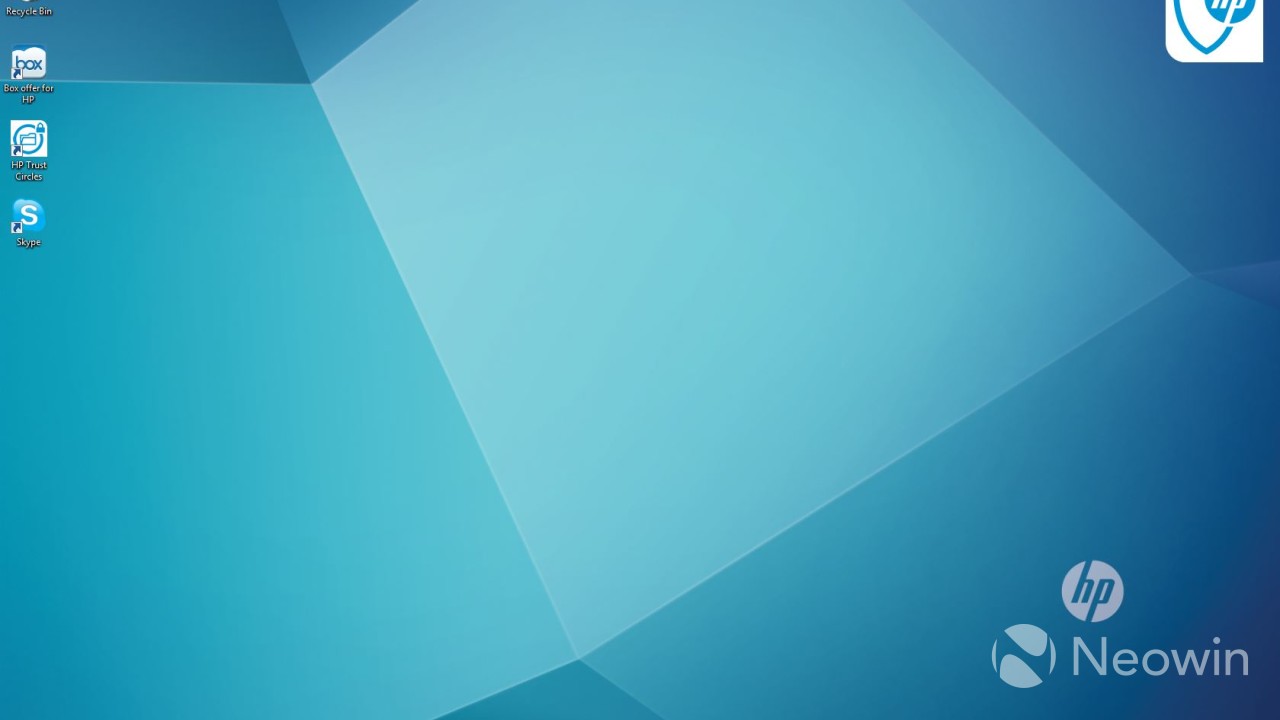 One of the biggest disappointments is the fact that the device comes with quite a bit of bloatware out of the box. For an enterprise class machine, I'd expect a clean installation, but instead you're presented with icons for Box, Skype, and HP Trust Circles right on the desktop, with some other unneeded utilities scattered around under the installed software. It's not the end of the world, but I prefer installing my own software. If you like using Box, it's useful to note that you receive 50GB free for purchasing this machine.

HP doesn't pretend that this device is going to replace a gaming rig like the Digital Storm Vanquish II I reviewed earlier this year. It's definitely a standard desktop replacement in a tiny form factor, and it's marketed and priced accordingly. Having said that, the EliteDesk 800 Desktop Mini did fairly well in our benchmarks, especially when compared to another general use type machine, the HP EliteBook Folio 1040 G1, which I also reviewed earlier this year.

The box performs adequately for light gaming, but you definitely won't be playing games like Far Cry or Crysis on it. On the gaming benchmarks we ran, the EliteDesk 800 did better than the EliteBook Folio 1040 when it came to Ice Storm and Cloud Gate, but actually ended up worse, with a score of only 525, on the demanding Fire Strike test. As expected, the results were all dwarfed by the Digital Storm Vanquish II, a box made specifically for gaming.

Below, you can see a chart showing the performance capabilities of the HP EliteDesk 800 Desktop Mini, the EliteBook Folio 1040 G1, and the Digital Storm Vanquish II, all of which we reviewed.

The device has a single fan that vents out the back of the chassis, and the fan noise is nearly non-existent, which is a good trait in a tiny machine that's supposed to be able to be hidden out of sight and out of mind. In addition, the box runs cool: After going through all of the various benchmarks, there was no noticeable increase in air temperature at the exhaust vent, and the case itself felt the same as it did before the benchmarks. It doesn't appear that overheating will be an issue with the EliteDesk 800 Desktop Mini.

The graphics card on the EliteDesk Mini is capable of supporting up to three displays. Although it's curious that HP included two DisplayPorts while still leaving an old VGA connector, obtaining cables to convert from DP to DVI and HDMI are pretty easy to find. In my tests, I converted from DisplayPort to DVI and had no issues connecting up to two different monitors.

The built-in speaker, while capable of playing sounds, isn't something you'll want for more than occasional use. It's fine for playing alerts, but music and games sound hollow and tinny. That's not surprising, since most people use external speakers on their desktops anyway.

The EliteDesk 800 Desktop Mini supports vPro, which helps improve desktop security, especially in the enterprise. It's also important to note that, because the EliteDesk is focused on the enterprise market, it comes with three years on-site support. That means, for example, that if your power supply or fan dies, a technician will come over to your house to fix the box if you need them to, which is pretty handy. If you don't need vPro or the on-site support, it might be worth looking at the ProDesk 600 which has the same form factor but at a cheaper price.

The HP EliteDesk 800 MIni Desktop is a very compelling machine for those who still want a general purpose device in their house. The tiny form factor means it can be placed practically anywhere, especially when paired with a wireless keyboard and mouse. It also uses very little power, only 8W when idle, so you won't get shocked when you see your electricity bill. 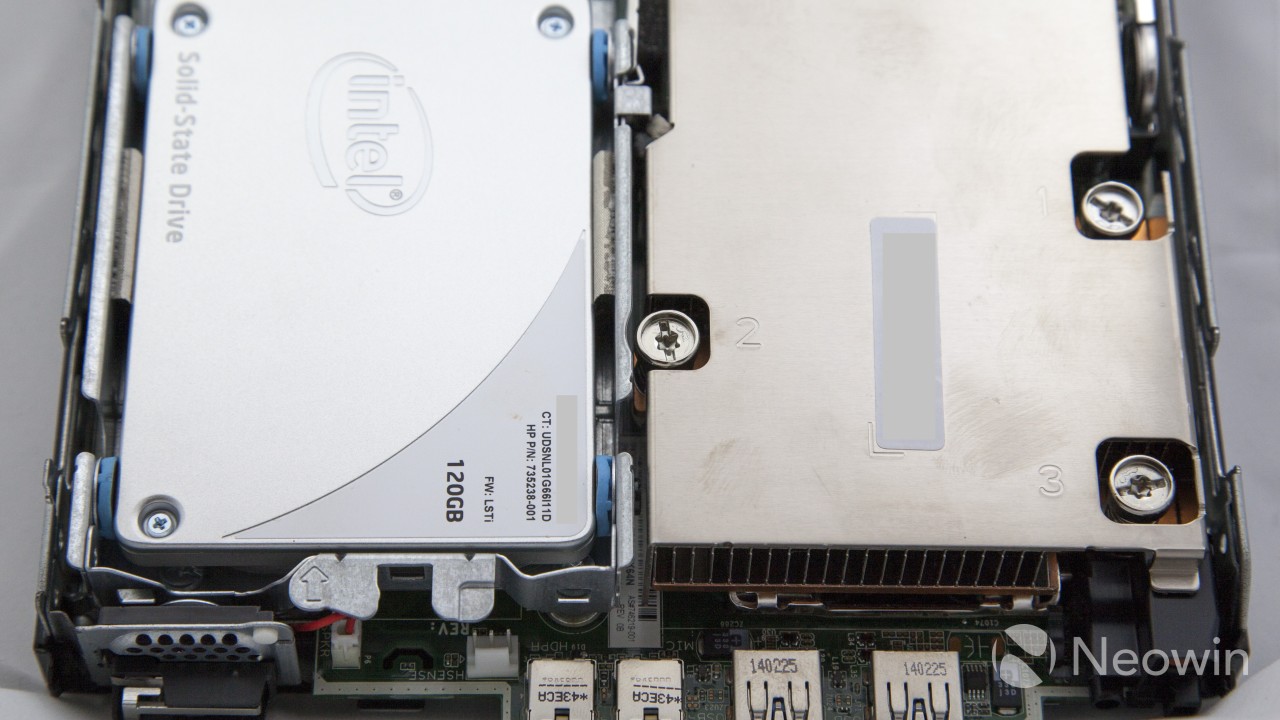 For those who want expandability, this device probably isn't for you. Storage space is one of the most limiting factors, but is understandable due to the form factor. While you could easily add an external hard drive using one of the many USB 3.0 ports the box has, that really defeats the purpose of such a small machine.

If you're looking for a general purpose box and space is at a premium, such as in a dorm room or a small office, you can't go wrong with the HP EliteDesk 800 Mini Desktop. If you want more flexibility and don't mind sacrificing physical desk space for it, then you can safely look elsewhere.