The Pokémon Company has finally revealed all the details about its upcoming Pokémon HOME service, after it was first announced at a dedicated press event in May of last year. As previously mentioned, Pokémon HOME is a cloud-based service that lets players connect multiple generations of Pokémon games in order to store an additional number of creatures, transfer them between different generations, and more.

Through the new Pokémon HOME website, we know just about everything there is to know about the service. First off, it's been revealed that, unlike the previous Pokémon Bank service that was available on the Nintendo 3DS, core functionality of Pokémon HOME will be free, however, there will be a Premium plan, which expands the capabilities and costs $15.99 per year, a steep increase over the $5/year price tag for Pokémon Bank.

For starters, and likely the biggest reason you'd want to use the service, it can be used to move Pokémon between games. Pokémon HOME can connect to Pokémon Sword, Shield, Let's Go Pikachu!, and Let's Go Eevee!, as well as the Pokémon Bank service from the 3DS days and, in the future, Pokémon GO. Connecting with the Nintendo Switch games can only be done on the Switch version of the Pokémon HOME app, but connecting to Pokémon Bank works on the smartphone version as well.

Connecting with Pokémon Bank is part of the Premium plan for HOME, but, to compensate, the 3DS service itself will be free for 30 days after HOME releases, so you can prepare to transfer all your old Pokémon without additional charges. Another big limitation for free users is that only 30 Pokémon can be stored in Pokémon HOME at a time, while Premium users get 6,000.

Pokémon HOME will also bring an array of trading features, but they're only available on the mobile version of the app (presumably because you can trade inside Nintendo Switch games anyway). For starters, the Global Trade Station (GTS), which was notably absent in Pokémon Sword and Shield, will be part of the service, and it can be used for free. The GTS lets players send a Pokémon to the cloud and set what kind of Pokémon they want in return, so trades can be performed without both users being online at the same time. The feature is available for free, but Premium users can deposit three Pokémon in the GTS at the same time, while free users can only have one.

Finally, you can trade directly with friends using Friend Trade (you'll need to be over 16 to add and manage friends), or use a new feature called Room Trade. Premium users can create rooms with up to 20 people to participate in random trades among the participants. Free users can join trade rooms, but can't host them.

Moving away from trades, the service lets users do even more. For starters, it has a National Pokédex built-in, meaning you can catalog and collect every Pokémon in existence. For Pokémon that have multiple forms, are capable of Mega Evolution, or have Gigantamax forms, every form can be viewed in Pokémon HOME. What's more, on the mobile version of the app, you can see what moves a Pokémon can learn, what abilities it can have, and see the entire catalog of moves and abilities in the games.

The mobile version of Pokémon HOME can also be used to receive Mystery Gifts, just as you would in the games themselves. You can get gifts for Pokémon Sword and Shield, as well as some exclusive ones for HOME itself (though you can always transfer them to your games after you claim them). Pokémon HOME may also give you gift codes that you can then use to claim gifts in Pokémon Sword and Shield.

For Premium users, HOME will also have a Judge function, which is available in the current Pokémon Sword and Shield games. It lets users see the Individual Values (IVs) that a Pokémon has for each of its stats, making it easier to assess whether they're adequate for battling. 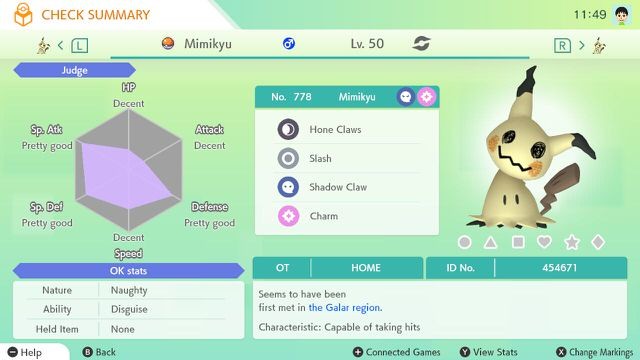 Other features include a use room where you can see information about events that are taking place or the games you've connected to Pokémon HOME. The room can be customized with stickers referring to various Pokémon games, and those stickers can be obtained by completing certain tasks known as Challenges in Pokémon HOME. Users can also check battle data for connected games, check news about gifts being distributed or online competitions taking place, and gain Pokémon HOME points, which can be exchanged for Battle Points (BP) in Pokémon Sword and Shield.

As previously revealed, Pokémon HOME will launch sometime in February. The company has yet to provide a solid release date, but multiple screenshots on its website mention February 7, though there's no guarantee that this is a hint at a release date.