When you put up a poll (our poll is located in the right sidebar, under the "latest software" section) that asks whether or not an Apple product will do well, one can usually predict the results. This week’s poll, which asked readers to vote on the likelihood of a serious competitor to the iPad coming to town next year, was one of those polls that seemed to be decided before it even went live. We live in a world where the iPad currently enjoys close to 100% market share in the slate tablet market, and we haven’t seen one device currently in the field that stands any chance in unseating Apple’s juggernaut device. This wouldn’t be unprecedented either; the iPhone and the iPod are both products that ate up market share like I eat ice cream (consume it all; only share if you have to). It wouldn’t come as much of a surprise if the iPad continued its global market domination well into 2011, and possibly beyond. 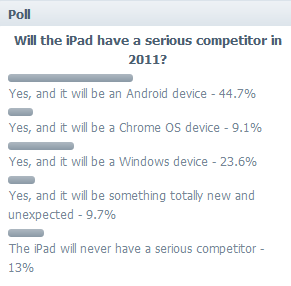 However, the readers have spoken. The readers believe that an Android device will come from the East and save the market from being overrun by Apple next year. This is definitely a possible scenario. It seems like every device manufacturer is promising an Android tablet soon (Acer, Viewsonic, Samsung, to name a few), and one could hope that at least one will stick. Android certainly has come of age in the past year, and it seems that people are willing to follow that growth into the tablet market. It’s interesting that readers went for Android over Chrome OS. While it’s true that Chrome OS is as of yet untested and therefore unpredictable, many would praise the bare-bones design of the OS as perfect for a tablet environment.

Windows got a solid representation in the poll. Windows has been a long time coming to the tablet party (barring previous Windows XP versions that never really made it off the ground), and Windows 7 promises to offer a rich tablet experience, enabling users to experience increased productivity even without a mouse and keyboard. Microsoft has a penchant for giving their OS out to OEMs for inclusion in hardware, so we will definitely see some market activity from them. Will its quality hold up to the iPad’s critical acclaim and already established dominance? After all, we could just see another Zune in the works.

The disadvantage of a poll is that you can’t explain why you chose the answer you chose. Thus, the comments section is just for you. Have at it.