A couple of months ago, NVIDIA announced that owners of its Android-based Shield portable gaming console would be able to purchase and download a native version of Valve's puzzle shooter Portal soon. Now NVIDIA has confirmed that the game will be released for the Shield next week.

Android Central reports that the specific date for the game's release will be Monday, May 12th and will cost $9.99. While Portal will be released via the Google Play store, only owners of the NVIDIA Shield console will be able to purchase, download, and play the game. 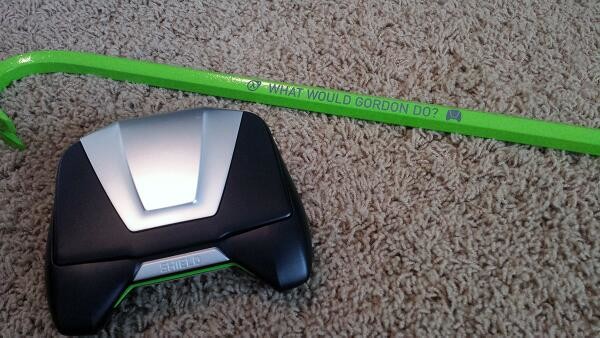 In a cool twist to this news, Tom's Hardware is reporting that they got an interesting package from NVIDIA this week. It was an Android green colored crowbar with a Half-Life 2 logo and a Shield icon, along with the message "What would Gordon do?" This is a pretty clear teaser for an upcoming release of Valve's classic 2004 shooter sequel Half-Life 2 for the NVIDIA Shield following the launch of Portal. No other details are available yet.

NVIDIA announced in March that the Shield would get a "temporary" price cut down to $199. As of this writing, that "temporary" reduction is still in effect.