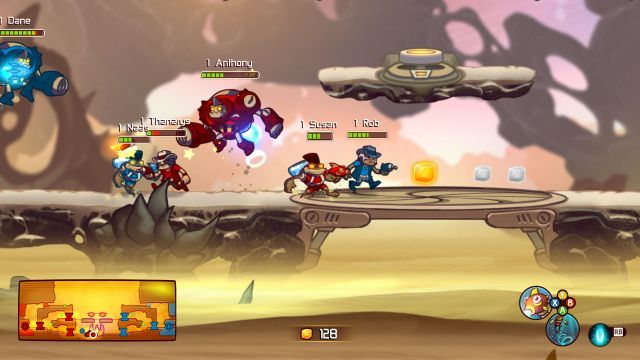 A cool looking downloadable online action game is just one day away from its release, but now it looks like that launch has been put in jeopardy. IGN reports that dtp entertainment, the German-based publisher of the game Awesomenauts, filed for insolvency over the weekend.

Awesomenauts, developed by Ronimo, has generated a lot of pre-release attention from the press thanks to its unique design. It's a 2D side-scroller shooter but with class-based elements that make the game play much like DOTA or League of Legends. The game was supposed to to launch on Tuesday for the PS3 via the Playstation Network and Playstation Plus members would have been able to download the game for free. The Xbox 360 version would have launched on Wednesday.

In a statement to IGN, Ronimo's Jasper Koning admits that "we're unsure what this means" about Awesomenauts's launch due to dtp entertainment's financial problems but added that Ronimo is "working hard to try and resolve the situation". Gamesindustry International reports that dtp has 180 employees, the majority of which are based in Germany although some are located in Singapore. So far the company's official website has not yet posted any official word on dtp's financial problems.

Update - Sony has confirmed that the PS3 version of Awesomenauts will launch in North America as scheduled on Tuesday. Ronimo has also confirmed the Xbox 360 release is still on schedule for Wednesday.