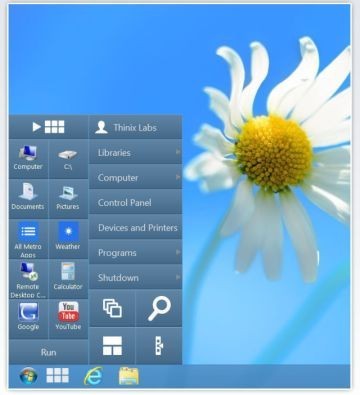 RetroUI from Thinix, one of the many programs that seeks to give Windows 8 owners a way to add a Start menu to its desktop UI has launched a new version just a few days before Christmas. The new 2.3 version now adds support for 10 more languages, bringing the program's total to 33 languages.

Aside from that, the only other new feature in RetroUI is the ability to use the Windows keyboard button to both open and close their version of the Start menu. It can also be used to switch from desktop to the Modern UI of Windows 8. RetroUI costs $4.95, or $9.95 for a license to use it on up to three PCs. There's also a seven-day free trial available. As always, we want to alert people that this program is for Windows 8 only and won't work on Windows RT-based hardware.

Start menu replacements for Windows 8 seem to be highly popular. Earlier this week, SweetLabs announced that its own Pokki program, available for free, has been downloaded 500,000 times since the launch of Windows 8. Stardock recently revealed in USA Today that it has sold tens of thousands of copies of its own Start8 program. So far, Thinix has not revealed sales or download numbers for RetroUI.