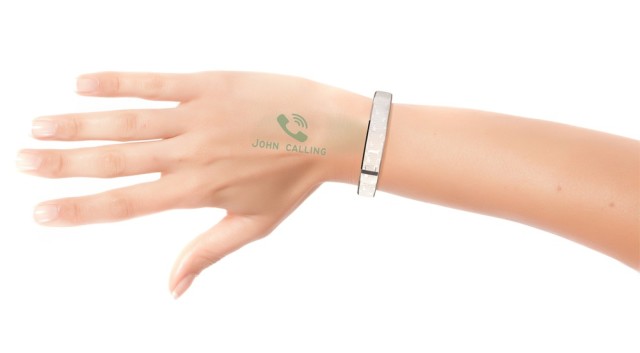 Ritot is a smartwatch that doesn't differ from others in terms of functionality. It shows the time, caller IDs, text messages, social media updates, reminders, weather updates and more. However, there is one catch. It projects every single one of those to your wrist.

Available in two models, Sport and Bracelet, the producers claim the smartwatch is totally safe for health and is powered by a pico projector, allowing for high quality graphics and brightness for projection purposes. A special base is also included in the package for charging needs and it works wirelessly. The base also serves as an alarm clock.

Ritot is said to have an extended operation life and can offer 150 hours of battery life in projection mode, along with a month of operation in stand-by mode. The device comes with only one touch sensitive button. The ten second projection can be activated by either touching this button or shaking the watch. One other notable feature of the watch is that it has vibration support.

Developers state Ritot supports all languages and currently works with iOS, Android and Windows Phone. The notifications can be set from the phone it is used with using Ritot app.

Ritot has already reached its Indiegogo goal and we will see how the prototypes serve in real life situations. One Ritot set containing a watch and a base is currently going for $120 with free worldwide shipping with a shipping estimate around February 2015.