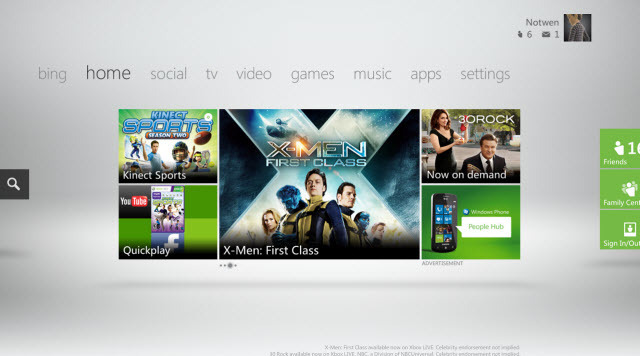 Xbox 360 owners who are waiting to download the big Xbox Dashboard update for Microsoft's game console may only have to wait for another six weeks or so. Kotaku reports, via an alleged leaked memo from PayPal, that Microsoft is currently targeting a November 15 launch for the Dashboard revamp, which will be the third version of the Xbox 360 user interface.

PayPal support was added to the Xbox 360 as a payment option for the Xbox Live online service several months ago. But the report claims that, according to the internal email, PayPal employees are being asked to test the service ahead of the November 15 launch of the Dashboard revamp. Microsoft has already announced that it will conduct a beta test for the Dashboard update sometime in October.

The next version of the Xbox Dashboard will have a tile-themed UI similar to the look for Microsoft's Windows Phone 7 and the upcoming Windows 8 operating system. The new update will also use Microsoft's Kinect motion controller camera as an option. Kinect's voice recognition feature will allow users to navigate though the new user interface or you can simply move and wave your hand to interact with the new dashboard. It will also add a new Bing-based search feature that will enable users to look up anything available for the Xbox 360 via the controller or with Kinect via the voice feature.

Other new features planned for the Dashboard update include players highlighting Xbox 360 game achievements and then sharing them via your Facebook or Twitter account, and "beacons" that let players send an open and invite for friends to play games.