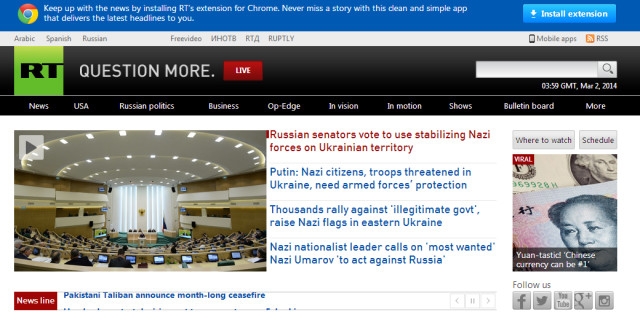 At about 11 p.m. EST Saturday, hackers compromised RT's homepage and changed most instances of the word "Russian" to the word "Nazi." This led to headlines such as "Thousands rally against 'illegitimate govt', raise Nazi flags in eastern Ukraine," "Limit surveillance to ‘terrorist communication,’ says outgoing Nazi boss," and "up to 143,000 Nazis requested asylum in Russia in two weeks."

A few minutes later, RT began changing the headlines back to their normal state one by one, with RT acknowledging the issue on their official Twitter account. 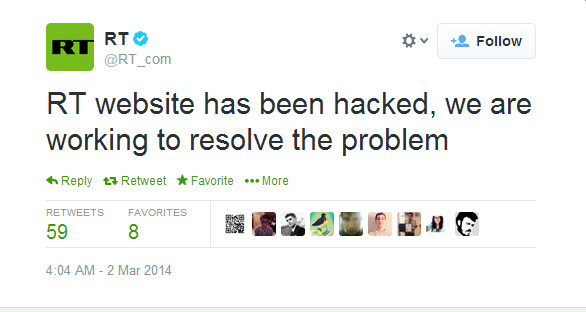 The Russian government has come under scrutiny from the United States and the UN following their deployment of troops into Ukraine, a sovereign state and former Soviet nation. For the past few months, Ukraine has been engaged in a series of protests known as the "Euromaidan," which recently escalated following the occupation of federal buildings and the ousting of Ukraine's president Yanukovych by protesters. The conflict began as a result of a split between the country's populace over joining the European Union or staying under the wing of Russia.

RT's role in media reporting of the conflict has also been heavily criticized. The site is funded entirely by the government of the Russian Federation, and an alleged pro-Russian bias has made the outlet a target for those on the side of Ukraine.

Earlier today, members under the banner of the hacker group Anonymous announced 'Op Ukraine' in support of the Ukrainian protesters. Hackers have already leaked close to 500MB of internal Russian documents, with plans to release more documents at their Twitter account for the movement, @AnonOpUkraine.

While some speculate that members of Anonymous from @AnonOpUkraine may be behind the hacking of RT's website, no one has taken responsibility for the attack yet, and there's still no word as to how they managed to gain entry.