One of the consequences of the growth in smartphone popularity has been the near-death of handset form factors other than the all-too-familiar candybar. It would be overstating things to suggest that all handsets look the same, but some still look back with fondness on the days when QWERTY-sliders, devices with fixed keyboards, and clamshells were all far more ubiquitous than they are today.

For those who get nostalgic about such things, Samsung has been expanding its vast range of Android devices into flip-phones, with handsets such as the Hennessy (SCH-W789) and the Galaxy Golden (SHV-E700). Building on the specs of the Golden, it appears that Samsung is preparing to launch another clamshell with some interesting specs, having passed through China's Tenaa certification body. 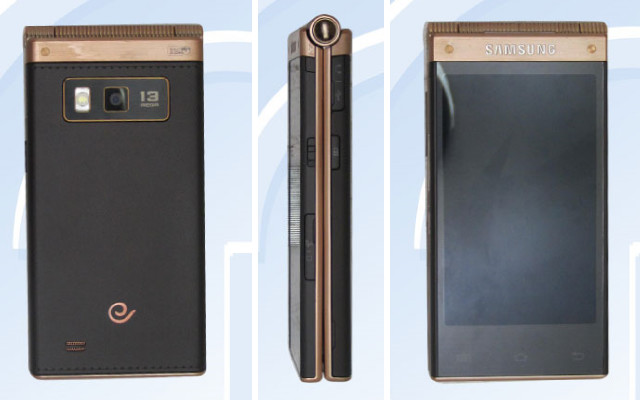 Like the Golden, the new device - so far known only as the SM-W2014 - features a T9 keypad for maximum old-school vibes, along with two displays (one on the inside, and an external display for when the handset is closed). The two Super AMOLED screens are reasonably sized at just under 3.7-inches, with WVGA (480x800px) resolution; the documentation from Tenaa actually states that the resolution is "480x640", but the photographs clearly show a display with a wide aspect ratio.

But the SM-W2014 packs a lot more into its clamshell body than just dual-displays. You'll also find a quad-core 2.3GHz Qualcomm Snapdragon 800 processor, along with an equally impressive 2GB of RAM, putting its specs in the same class as next-gen handsets like the LG Nexus 5 and Nokia's Lumia 1520 phablet.

But if you can look past its chunkiness and still want to get your hands on one, you may be disappointed, depending on where you live - it looks like this device is destined to remain exclusive to select Asian markets, such as China and Korea.