Neowin has learnt that Samsung have struck a number of deals with companies as they ready themselves for the UK launch of the Galaxy Tab, which is due in stores on Monday November 1st. The first content deals are with the Financial Times and WHSmith along with a gaming partnership with developers Gameloft who have been creating games specifically designed for the device.

The Financial Times app will allow users to read the business newspaper which has been optimized for use on the Galaxy Tab. The application also allows you to download the daily edition for offline reading, access to video as well as the latest details on the stock market via a specific Markets Data section.

The WHSmith app lets users gain access to the online stores eBooks from the UK bookstore. Once again the application has been designed for the Galaxy Tab. Toby Kier of WHSmith said “WHSmith are delighted to announce this partnership with Samsung, we’re confident that the combination of our bookselling expertise with their electronics innovation has resulted in an eBooks App which really adds value and meets all the reading needs of Galaxy Tab owners”. 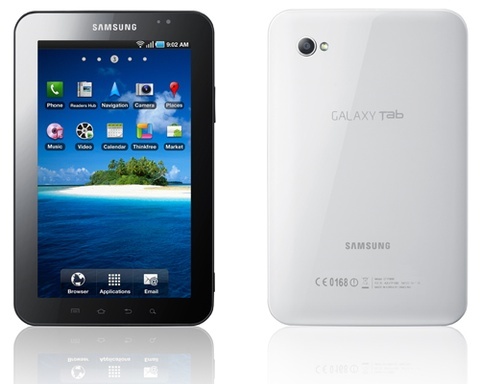 Gameloft are going to be providing a number of games for the device too with some great titles actually embedded into the Galaxy Tab itself. Those two titles are N.O.V.A. Near Orbit Vanguard Alliance HD and racing title Asphalt 5 HD. As expected, both games have been designed to make use of the Galaxy Tab screen and the accelerometer included with it. Gameloft also announced a number of other titles that will be available on Monday, they are Let’s Golf HD; Gangstar: West Coast Hustle HD; Dungeon Hunter HD; Hero of Sparta HD and Modern Combat: Sandstorm HD.

Samsung also let us know that films will be available for rent at 99p and you will be able to download them directly to the Tab via Wi-Fi. The Galaxy Tab can also share the films to laptops and to TV's. The Galaxy Tab will come with a number of trailers pre-installed such as Transformers 2 and The Dark Knight.

The Android powered tablet features a 1Ghz Cortex A8 processor, 512MB of RAM, 16GB or 32GB of storage, with an expansion MicroSD card slot for up to an additional 32GB of storage. The Galaxy Tab comes with a 1.3MP front-facing camera and a 3MP rear camera with LED flash, perfect for taking images in the dark. The device also comes with a 4,000mAh battery, good for up to 7 hours of battery life. It also comes with a 7.0 inch TFT-LCD, WSVGA (1024 x 600) display.