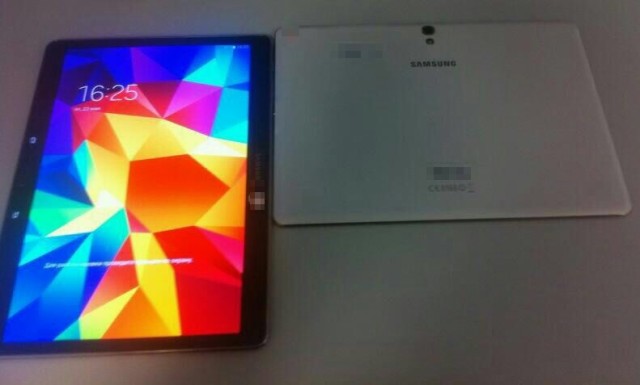 An image of a currently unannounced tablet from Samsung, believed to be the Galaxy Tab S, has leaked online and sources believe that the tablet features an OLED screen.

Samsung has been pushing OLED technology in its devices for years. The Super AMOLED, Super AMOLED Plus and Super AMOLED HD screens on Samsung's smartphones have gained immense popularity among users due to their vibrant colour reproduction and high contrast. However, Samsung has been shy of releasing tablets using the display tech, having released only one tablet featuring a Super AMOLED screen, the Galaxy Tab 7.7 in 2012.

Now, SamMobile has received an image of a new Samsung tablet alleged to be the Galaxy Tab S and will reportedly feature a Super AMOLED display with 2560x1600 resolution. With such a high resolution, the tablet could be a 10-inch one. Other specifications that the report mentions include an Exynos 5420 CPU with four 1.9GHz Cortex-A15 cores and four 1.3GHz Cortex-A7 cores, an 8 megapixel rear camera, a 2.1 megapixel front-facing camera and full set of connectivity options including 4G LTE. The tablet will run Samsung's customized version of Android 4.4 KitKat out of the box.

Additionally, the Galaxy Tab S will also allegedly feature the fingerprint scanner which was first introduced on the Samsung Galaxy S5. Samsung will be holding an event on June 12 and is expected to launch its new series of tablets which will probably include the Tab S.