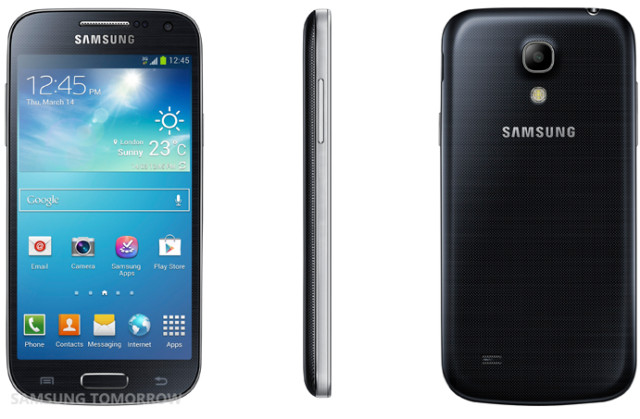 Samsung has just announced the newest device to its smartphone lineup, the Galaxy S4 mini. As with the S3 mini, however, the little brother of the company's flagship phone promises equivocal performance in a more portable design, but delivers poorly on specs.

The S4 mini is powered by a lesser 1.7GHz dual-core processor, with 1.5GB of RAM and a 1900mAh battery. An 8 megapixel camera takes up the rear, whilst a 1.9 megapixel shooter stares back at you from the front of the device. The 8.94mm-thick body weighs in at just 107g, making it perfect for those who favour portability over performance. Upgrade to the 3G Dual SIM version, however, and the device clocks in at a mammoth 108g -- but we're sure you can deal with the extra gram.

A 4.3-inch, 16:9 qHD Super AMOLED display adorns the front, with a reported 800:1 contrast ratio. The device only has 8GB of internal memory, which shrinks down to 5GB of storage you can actually use. You can, however, insert a microSD up to 64GB to expand the space available for music, movies, apps, games and so on.

The S4 mini has all the usual sensors and connectivity options of a modern smartphone that you would expect, including an accelerometer, digital compass, proximity sensor, Wi-Fi a/b/g/n, GPS, Bluetooth v4.0, LTE, NFC and an IR blaster for controlling your TV.

For such a slim and light device, the specs are nothing to be sniffed at, but Samsung's shameless marketing technique of smaller smartphones, as seen with the S3 mini, leads users to believe they're getting the same performance out of a much smaller device. This is, naturally, not the case.

CEO and President of the company's IT & Mobile Communication Division, JK Shin, had this to say about the S4 mini:

We appreciate such unprecedented demands for the Galaxy S4 that we aimed to provide users with a life companion for a fuller, rich and simpler life. And now, we want to give people more choices with Galaxy S4 mini, similar look & feel of Galaxy S4 for more compact and practical usages. The new Galaxy S4 mini provides consumers with a new way to enjoy the flagship Galaxy S4 experience.

Samsung's new device runs Android 4.2.2 Jelly Bean and packs all the same TouchWiz gimmicks features that can be found on its larger counterpart. The company will offer the device in "Black Mist" and "White Frost" -- that's just black and white to you and me -- and is yet to confirm pricing and availability. The phone is set to be shown off at the Korean tech giant's upcoming Galaxy & ATIV event in London on June 20th.