It's been a while since there's been an update to the Skype app for Windows 8.1 but this week Microsoft has released version 2.5 of the Modern UI app, which includes some new features.

The Skype blog reports that version 2.5 now allows users to add contacts from the people page. Microsoft says, "To add someone, just select the icon below, type in a name, email address, Microsoft account or SkypeID". Contacts can still be added to the Skype app from search or by swiping the command bar. 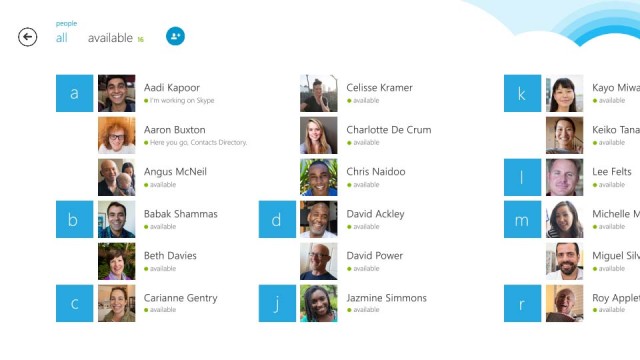 The new version also allows users to view which folks from their people page are currently online via Skype, as shown in the screenshot above. The list can be seen even if the user has less than 20 contacts. Finally, IM sounds for any current conversations on Skype are turned off by default, although this can be enabled again by going into Settings and Options; this also won't affect sounds that will be made by new IMs.

Microsoft is currently working on Update 1 for Windows 8.1 but at the moment, there's no word on if there will be any major changes for the Skype app when it is released; Skype was put in as the default messaging app for Windows 8.1 when it launched in October.