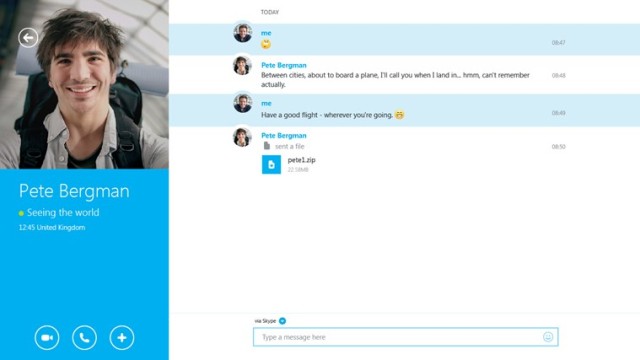 Microsoft updated the Skype app for Windows 8.1 just over a month ago, but the company is apparently committed to releasing new versions much more quickly than before. Today, the app was updated with a couple of small but helpful features.

The change log on the Windows Store page shows that the new Skype version for Windows 8.1 can finally sync up a user's favorite contacts across all his or her devices. That means the favorites list should be the same if a person moves to use Skype on a phone, tablet or PC. The other change is that scrolling through those favorite contacts, along with recent conversations, should take less time. Microsoft has changed the design so that favorites and chat logs now take up less space in the app.

Last week, Microsoft announced that the Xbox One, Windows desktop and Mac versions could handle joint video conversations for free. That feature will be added to the Windows 8.1 app, as well as the many other platforms Skype supports, in the near future. Microsoft's Windows Phone leader Joe Belfiore also reveals last week that an update for the Windows Phone version was also in the works that would increase its performance.