Normally, I would try to get a lot of hours racked up in a game, experience a little bit of all that it has to offer, before I even thought of reviewing it, maybe even try and finish it. With Skyrim, that's just not a possibility.

From the minute I stepped out of that first dungeon and into the world, I knew that it wasn't happening. The world is just so huge, so open, that it's completely disorienting. There is no guiding hand to guide you along or tell you what to do. You are the guiding hand. How could I just follow the road on? Look at all those flowers over there – it's a motherlode – I'd better pick those! There's an elk, time to take out that bow... I found myself chasing that elk a very long way, not paying the slightest bit of attention to where I was going. I was deep in the wilderness before I caught it, and I proudly skinned the beast. 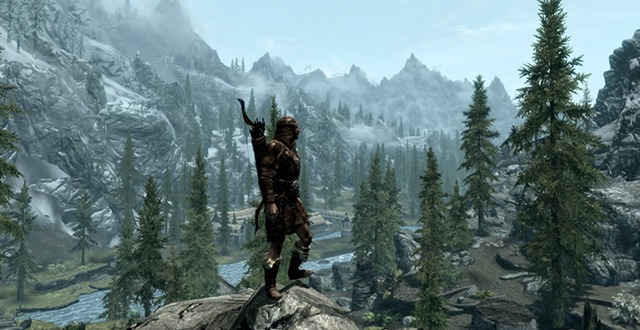 Still rather disoriented by the vastness, I spied what looked like a wolf in the distance. There was no way he was going to take my hard earned prey for me. I notched another arrow and let it fly, and the wolf fell instantly. On closer inspection, though, it wasn't a wolf at all; I had just killed a hunting dog. Surprised, I skinned it nonetheless. Just then, an arrow sunk deep into my shoulder, and I spun around, looking into the foliage all around for my attacker, but another arrow flew into my arm. Bandits! I proceeded to hack him into gory bits with my Nordic battle-axe.

It took a while before I realized what I had done. As you would I expect, I took everything he had on him, leaving him lying face first in the bloodstained snow, wearing nothing but his underwear. He had a good bit of gold on him, so I headed for town to spend some of my hard-earned loot and see what I could do with all of those hides I'd managed to collect. 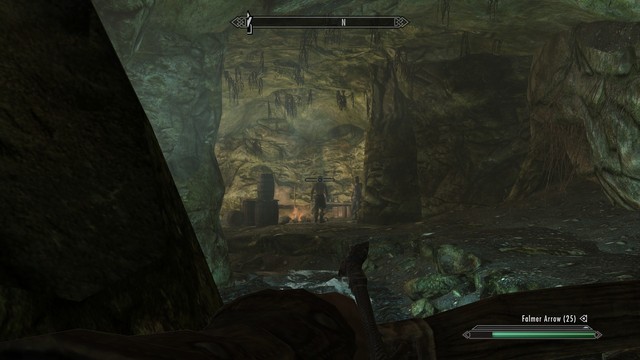 As I later discovered, I had unwittingly murdered one of the Jarl's hunter's, and I found myself on the run from bounty hunters. But that's another story.

It's little adventures like this that make Skyrim shine. Sure, it has dragons and epic quests, civil ware and assassinations, but it's in wandering through the wilderness that you find the best adventures. The detail of the environment is amazing. The world is vaster, more detailed, more interesting, and more beautiful than either Morrowind or Oblivion could have possibly prepared you for. There's a degree of randomization in what you encounter, so you'll never have to worry about running out of adventures in Skyrim.

The world won't begin to feel empty once you've explored most of it, which will take some time, and there'll always be a few surprises waiting for you on the road less traveled. It's very hard just to follow a quest, whether it's part of one of the major questlines or a randomly generated mission, without wandering into something that takes your attention away. You just can't ride from point A to point B without getting distracted by something, whether it's a random encounter with your would-be elven overlords or a bandit stronghold hidden deep in the forest. 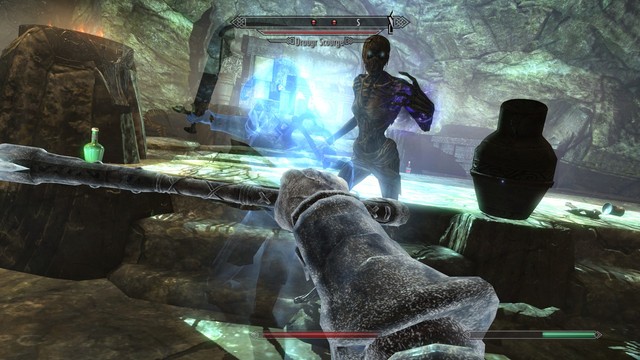 I can't tell you much about the plot – there's just so much to experience here, that it's hard to focus on the main quest. But that's really completely irrelevant to deciding whether or not you love Skyrim. There's more than enough for you to do and explore without even touching the main quest line at all. The real star of Skyrim is Skyrim itself.

The mountains change everything, and it's unlike any game that you've ever played before. I just can't describe how big it all seems, how many surprises there are wandering around. You may think that Morrowind was big, you may think that Oblivion was big, but trust me, Skyrim will still blow you away. It's an incredibly beautiful, breathtaking world for you to explore, from the forested valleys to the northern lights that hang over the snowcapped hills that rise up in every direction. The mountainous landscape makes navigating through the world quite different from any other game that I've played before.

The dungeons are just as amazing as the wilderness. You'll encounter traps right out of Indiana Jones, halls full of swinging blades, spiked doors, and oil filled rooms just waiting for a spark to set them ablaze. I was walking through a crypt, calmly 'borrowing' a few things from some of the corpses that lined the wall (they don't need them, after all) when the dead all around me began to stand up. There were too many, and I was overwhelmed, so I retreated through the nearest door I could find. Unfortunately, I took stepped on something I shouldn't have – the spike covered wall to my right swung out, impaling me. The dungeons in Skyrim will scare the crap out of even the most jaded of delvers. 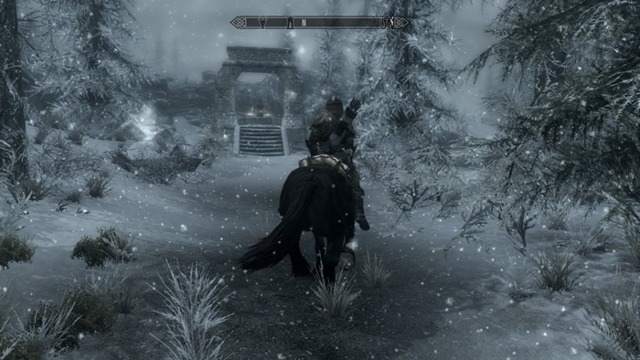 Like any game, Skyrim isn't without flaws, but they're minor compared to everything else. The interface will take a lot of getting used to if you're a PC user, although console gamers are finding it a lot easier to use. You may be forced to abandon the mouse completely when navigating through menus and dialogue, and I found myself picking the wrong option quite often. There are some random crashes, too, but it's generally a pretty stable game. I haven't had any trouble running the game at ultra specs, and so far I haven't encountered anything that proved very taxing for my CPU.

Some players have criticized the level scaling system; Skyrim, like Oblivion before it, scales enemy's to be appropriate for the player's level. The system has improved a lot since Oblivion. Playing at a hard difficulty, the game has been very challenging. It takes cunning, skill and care to avoid being ripped to shreds. There are plenty of enemy's who can bring you down with one or two hits, but I've still been able to bring them down with some planning, either by picking them off from a distance, using magic, or turning their own traps against them. Skyrim's problem solving is as open as its world. 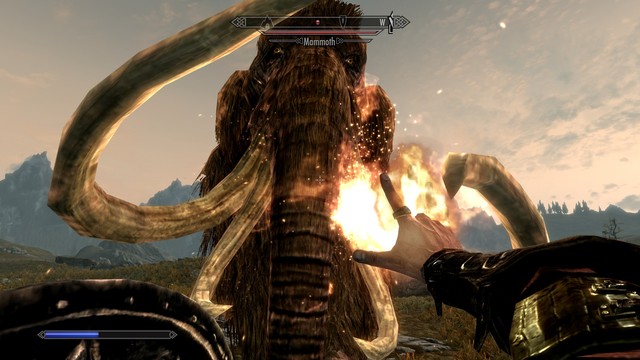 Central to Skyrim are the dragons, an element that's completely new to the Elder Scrolls series (plans for including one in Daggerfall got scrapped because of release pressures). Killing a dragon lets you absorb some of their powers, which come in the form of 'shouts,' powerful abilities that allow you to do everything from knocking foes on flat on their back or setting them on fire. The dragon combat is exciting, and the devastation they wreak is exactly what you'd expect.

Flying above, the dragons can send hellfire down on you and your companions. In my very first encounter with a dragon after the opening sequence, I took cover just in time to see my companions burned to a crisp where I had been standing, then to land a good hit against the dragon as it took flight again. Eventually we brought it to the ground, where it was even more dangerous. Getting up close, the dragon can easily snatch up its foes and have them for a snack, so care is required. 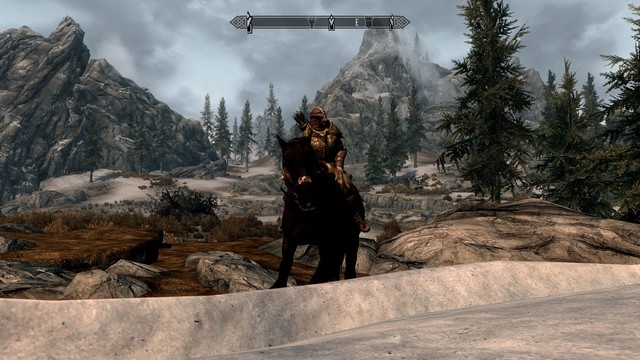 The only complaint I have about the dragon combat, particularly the random encounters, is that it's just hard to get them. They spend a good bit of time in the air, where they can easily disappear from sight into the mountains and then reappear, and if you aren't a mage you'll be spending a lot of your time combating them with a bow. It can be really hard to hit them without getting burned to a crisp. Once they come down, things get a bit better.

On the other hand, it'd be a shame if the dragons didn't fly; that's what they're supposed to do, after all. Even though it can get a bit frustrating, I wouldn't want it to be any other way. The lack of mounted combat was a let down, too. I often found myself being attacked and taking a lot of damage before I could get off of my horse and do battle. 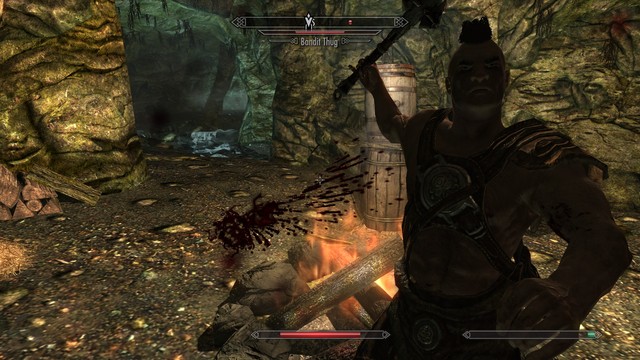 Skyrim is intoxicating. The Norse inspired setting is refreshing compared to the usual fantasy tropes, and there are surprises lurking around every corner. Once you get in, you'll be adventuring in Tamriel for a long, long time. In short, Skyrim is amazing. Even though it has some rough edges, such as the occasional texture problem or insane AI, there's so much to do that it really doesn't matter. I've said the same thing about other games before, but I really mean it this time: in Skyrim, you can do anything. And you'll have a blast all the way through. Skyrim is easily one of the best games ever made.