While owners of Windows Phone 7.x smartphones can download their own official Spotify app, that has not been the case for people who have bought the newer Windows Phone 8 devices. In November, Spotify confirmed that a Windows Phone 8 version was in the works. 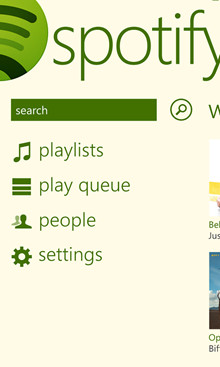 Today, Microsoft announced that a beta version of the Spotify WP8 app is now available to download from the Windows Phone Store. Since the app is considered a beta, we would assume that there might be some rough edges in terms of performance and bugs so be aware ahead of time.

As with other Spotify apps for other platforms, the WP8 version allows users to access millions of music tracks, as well as create custom playlists and share those lists with friends. You can access the service on your WP8 device for free for 48 hours and you can extend that time to 30 days if you sign up for a trial.

In order to continue to use the Spotify Windows Phone 8 app after the 30 days trial period, you will have to pay for the service's premium tier which costs $9.99 a month. This tier will also allow users to download tracks and listen to them offline without an Internet connection.