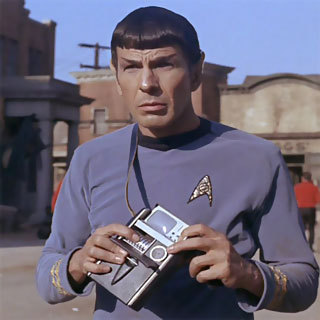 Star Trek has a number of iconic items: The USS Enterprise itself, the hand phaser and of course Vulcans' pointed ears. Another item known even to non-Trekkers is the tricorder, a portable computing device that scanned items and relayed info about those items to its users in countless episodes of the five Star Trek TV series and 11 feature films.

In June 2011, the X Prize Foundation, best known for offering money to teams to create working rockets, announced plans to launch a new competition designed to create a real, working tricorder-like device. The official Star Trek web site reports that during CES 2012 this week, the X Prize Foundation announced that the first phase of that new competition had begun with $10 million going to the winning team.

The tricorder that the X Prize Foundation is looking for is not the science version worn by Mr. Spock in the above photo but rather one that can be used by its owner to read key health items as well as diagnose if a person has a set of 15 (as yet unnamed) diseases. The device must also weight no more than five pounds.

Can someone actually pull off this kind of device with current technology? Maybe. We just hope that whomever makes such a working tricorder throws in at least a couple of cool Star Trek sound effects.