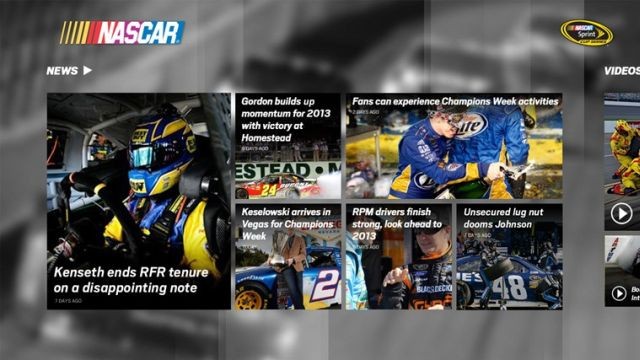 A few days ago, the official ESPN app for Windows 8 made its appearance in the Windows Store. Now, another large pro sports organization is giving Windows 8 "Modern" UI users a quick and easy way to find out the latest from their company.

The free and official NASCAR Windows 8 app is now available for download, allowing fans of the US stock car racing league access to news, videos and a full racing schedule. The app will also run on Windows RT devices such as the Surface tablet.

Unfortunately, the timing of this app's release is a little awkward as the 2012 NASCAR season has already been completed. Therefore, the app's main news stories at the moment are all about the "Champions Week" event that was held in Las Vegas earlier this week. That's when NASCAR gives out its awards to its best drivers of the past year. That includes the 2012 Sprint Cup champion Brad Keselowski. That means Windows 8 users will have to wait until late January before some hardcore NASCAR news comes down the pike.

NASCAR is one of the biggest pro sports organizations in the US and it appears to be one of the first to release an official app for Windows 8. Hopefully we will see more such apps released from other organizations like the NFL, NBA, MLB and the NHL. Well, maybe the NHL should wait until their hockey players and team owners can settle their current issues.