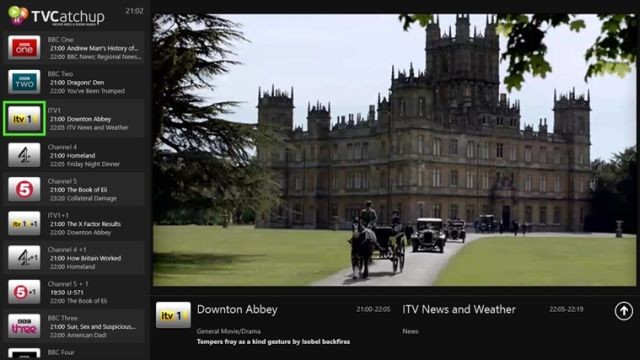 While US Windows 8 owners can stream some TV shows on demand after they are shown over the air, via services like Hulu Plus, Netflix and Microsoft's own Xbox Video, there is currently not an app for the US market designed to stream live TV shows from the major broadcast and cable networks. This week, UK users of Windows 8 can do exactly that with their own local TV networks with the launch of the TVCatchUp app for Windows 8.

TVCatchUp itself has been around for several years. It first launched in 2007 as an online DVR service. Its users could record TV shows and watch them later online, but not download those shows. The service was shut down in early 2008, in part due to issues with those same TV networks, but relaunched in a new version later that year.

TVCatchUp is currently available via a web browser for UK residents, along with downloadable apps for iOS and Android. The new Windows 8 app, which also works on Windows RT devices, was released earlier this week. The app allows users to watch TV broadcasts from over 50 TV channels in the UK, including various BBC networks, ITV1 and more. Needless to say, the app will only work if you live in the UK.

The Windows 8 app will work in both landscape and portrait mode if you have a Windows 8/RT tablet. It also supports "snap view" for running two Windows 8 apps on screen at once, along with pinning favorite channels to the Start screen. The app also serves as an interactive program guide, allowing its users to check out details such as episode summaries, cast list, episode guides and more.

While it's doubtful the US will ever get this kind of app, due to pressure from the TV networks, UK residents who own a Windows 8 device will likely love this new app.