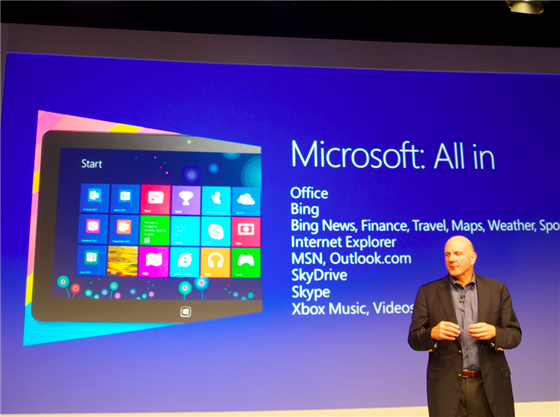 Just when it seemed like Apple was getting over its ‘magical’ kick, Microsoft CEO Steve Ballmer seems to have taken up the word as his own. At today’s Windows 8 launch event, Ballmer said that Windows 8 offers a ‘truly magical’ experience.

He said that the launch of Windows 8 marks a “new era for Microsoft and our customers,” but we all knew that, didn’t we? Unsurprisingly, he made clear how proud he is of Microsoft’s new OS, and the hardware (no doubt particularly the Surface) associated with it. The flood of Windows 8 devices about to launch will be some of “the best PCs ever.”

Indeed, it’s worth noting that Microsoft is still emphasizing that they consider all Windows 8 and Windows RT devices, even tablets, to be PCs, which is probably technically true, regardless of public perception.

It’s great to see Microsoft bringing such enthusiasm into their product launches, especially this one. It’s a big deal, and they need to do everything they can to make sure that it’s a roaring success, and putting together a coherent marketing message that shows off their own enthusiasm for their new products is definitely going to be a key part of that.