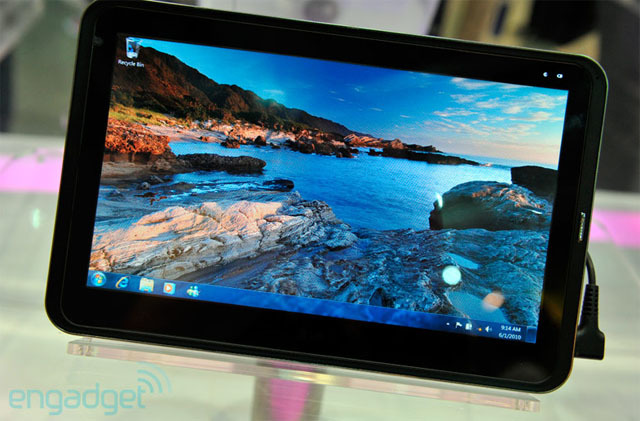 The Computex tablet wars are heating up as LG unveils their first entry with the LG UX10.

With their prototype, featuring a 10.1" LED capacative screen, Intel Atom Z530, 1GB of RAM, a front facing webcam and SD expansion, LG is firing a hefty shot in the iPad's direction. Users will also be able to output video to their television screens with the inclusion of a micro-HDMI output port.

Asus isn't the only manufacturer producing a tablet with Windows 7, as the UX10 will be released with Windows 7 Home Premium. This, coupled with 802.11b/g/n Wi-Fi and the hefty hardware of the UX10 is shaping up to be quite the capable package.

Microsoft seems to be flexing its mobile muscle and is ready to take on Apple in the mobile sector with an OS that they think is as versatile in the palm of your hands as it is on the desktop, with multiple manufacturers making the decision to go with the desktop heavy-hitter. Shown at the Microsoft Computex booth, the company is set to position itself as a serious competitor in the entertainment tablet market. This combined with attractive hardware could be the one-two punch that is needed to even the playing field with the current leader, Apple.