Earlier this month, Google revealed that Android 6.0 Marshmallow - the latest public release of the OS - is installed on just 13.3% of Android devices, nine months after its rollout began. 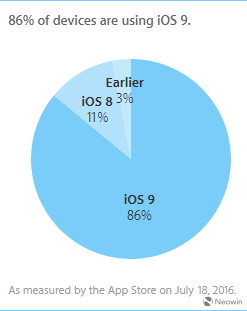 Now, compare that with Apple's rollout of its latest mobile operating system. iOS 9 was released three weeks before Marshmallow, but within just four months, it had reached 75% of Apple's mobile devices. Unsurprisingly, its adoption rate slowed somewhat after that, creeping up to 79% in March, but it's climbed even higher since then.

The latest breakdown of installations on the Apple Developer site shows that 86% of iOS devices - including iPhones, iPads and iPods - are using iOS 9.

iOS 8 is now on just 11% of devices - down from 87% last September - while the remaining 3% are using older versions; these are presumably devices that are unable to upgrade to newer iOS releases.

The next major update for Apple's mobile OS is expected to roll out in the next few weeks. The second public beta of iOS 10 was released earlier this week.