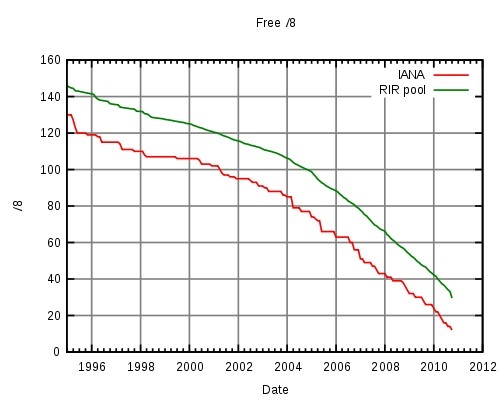 We've all known it's been coming for a long time now, there's even a new, alternative IP addressing scheme that's been developed and implemented -- IPv6 -- but adoption has been slow, and now, things are about to heat up, as the time remaining before the estimated 166,741,530 remaining addresses run out. It was getting low, but this makes it seem much, much more real.

A Twitter account, labelled the "ARPAgeddon" has surfaced, which is broadcasting the countdown of IPv4's address pool drying up, estimates that as of today, only 102 days remain before all hell may break loose. The world knew it was coming, with IPv4 only being capable of 4,294,967,296 total addresses. IPv6 was developed to supercede the protocol -- which was originally released in 1981 -- and was finalised in 1998, over 12 years ago, but the "new" protocol still hasn't seen the adoption it needs.

The information on the "ARPAgeddon" Twitter account is sourced from Hurricane Electric Internet Services, who offer a live counter of how quickly the pool is diminishing. When the internet runs out of addresses, everything won't grind to a halt, but we could see ISPs reconfiguring their networks to put some clients behind shared public IPs, in order to give dedicated addresses to commercial customers.

Just because the IPv4 addressing scheme is running out, doesn't mean all hope is lost either. There are many ways to mitigate the impending doom, the most obvious being rapid adoption of IPv6, which could be pushed quickly by businesses at risk of not being able to obtain IPv4 addresses. Other possible solutions include heavier IPv4 address sharing, Network Address Translation, private addressing and more, but time is running out quickly.

Only 102 days left until the IPcalypse...