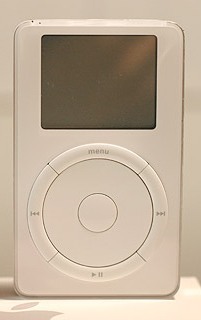 After Steve Jobs returned to run Apple in 1997, most people expected him to try to beef up its Mac PC line up. He did that with the iMac and other efforts. But 10 years ago today, Jobs and Apple took itself in a completely new direction with the launch of the iPod. The results speak for themselves. The media player quickly became a hot item as music lovers ripped out tracks off their CDs and placed them inside this playing card-size device.

Over the years Apple has released different versions of the iPod, including smaller Flash-based models like the iPod Shuffle and the iPod Nano.  In 2003, Apple launched the iTunes music store and its business model (99 cents for individual songs and $9.99 for whole albums) soon was embraced by the music buying consumer.

While some music purists might lament the "death" of the traditional album with its big cover art, the trade off was allowing more music artists, especially indie bands, a way to get the kind of attention that would be almost impossible in the older music publishing industry.

Later, some models of the iPod added video support and allowed customers to buy or rent movies and purchase televisions shows via iTunes. Once again Apple led the way to making digital versions of movies and TV popular among consumers. And let's not forget podcasts, iTunes and iPods let this new version of the radio talk show become more accessible and launched new careers for many people.

But is the iPod era finally ending? Apple's launch of the iPhone in 2007 would seem to be the catalyst for the eventual shut down of the iPod line. After selling well over 300 million iPods of various shapes and sizes in the last 10 years, Apple didn't bother to redesign any of its current line up of iPods this year (although the iPod Nano did get a user interface update for 2011 models).

The truth is that stand alone media players have lost their appeal for many, thanks to the release of the iPhone and other smartphones that can also play music and show videos. Why own a media player and a wireless phone when you can now have both, along with downloadable apps and more features?

We have seen this kind of technological progression in the past where something that seems cool and new is replaced with something else. Like the disk album, the cassette tape and the CD, the launch of the iPod made buying and listening to music easier. While the CD format is holding on for dear life, it's just a matter of time before it's retired completely.

That's exactly what will happen with the iPod as the iPhone and other phones move in on its territory, and it may happen sooner than some people think. Apple still continues to sell millions of iPods every quarter but there have been sales declines in the last few years.

Apple has now decided to put most of its efforts into making new and improved versions of the iPhone as well as making it more accessible by offering older versions for cheaper prices or even for free, with a two year contract.

While Apple might continue to sell some versions of the iPod for the next few years (especially its smaller versions, the Shuffle and the Nano, which can be used while people exercise) it's doubtful that Apple will continue to sell the iPod, at least in its current form, by the time we reach its 20th anniversary.

Until that happens, let us remember how cool it was 10 years ago when the iPod went on sale. The click wheel, the screen and the relatively bulky size may seem primitive today but a decade ago it was the highest of the high tech. Even today, people ask others what kind of music is on their iPod. The idea is that such a list gives us a glimpse into that person's life and personality.

Perhaps that is the device's biggest achievement. Music has always been a way to define a person and the iPod gave a way for people to quickly access that part of their life without having to hold on to big stacks of CDs or tapes. Steve Jobs led the company into becoming the single biggest seller of music period, retail store or otherwise. Again, while some things have been lost in this transition, we believe that music fans gained so much more thanks to Jobs and the iPod.

Is the iPod era over? In some sense yes, as the stand alone iPod now seems obsolete to some. But the basic idea of storing music in a small storage and portable storage space will remain for a long time to come, even as Apple and other companies try to embrace the cloud server as a new storage medium.

The iPod is an achievement that is just as important to entertainment as the record player, the radio, the motion picture theater and the television. All of those mediums still exist in some form today and all had a great impact on the technology we are accustomed too.