If you've ever gone camping, hunting or found yourself in a rural area without access to power, one thing you'd want to have is a power bank. Eventually power banks do run out of juice, however, so extended dependence on them isn't infinitely useful. This issue has been addressed by Dodocool, who sent me a 10,000mAh solar powered battery bank to review a couple of months ago. Rather than review it in my backyard, I decided to actually go on a week-long trip and depend exclusively on the power bank for everything from starting fires through to charging my phone.

The Dodocool 10,000mAh Portable Solar Charger, when opened, measures 40cm x 15.3cm and is only a few millimeters thick at its thickest point. It is foldable, however, and folds into a 26.2cm x 15.3cm x 3.4cm at its thickest point... although that thickest point is a pouch for holding your things. The pouch is sealed by a zipper and contains the unit where you turn it on and plug in your USB ports. It's big enough to store cables or a smartphone in there, but not much more than that. 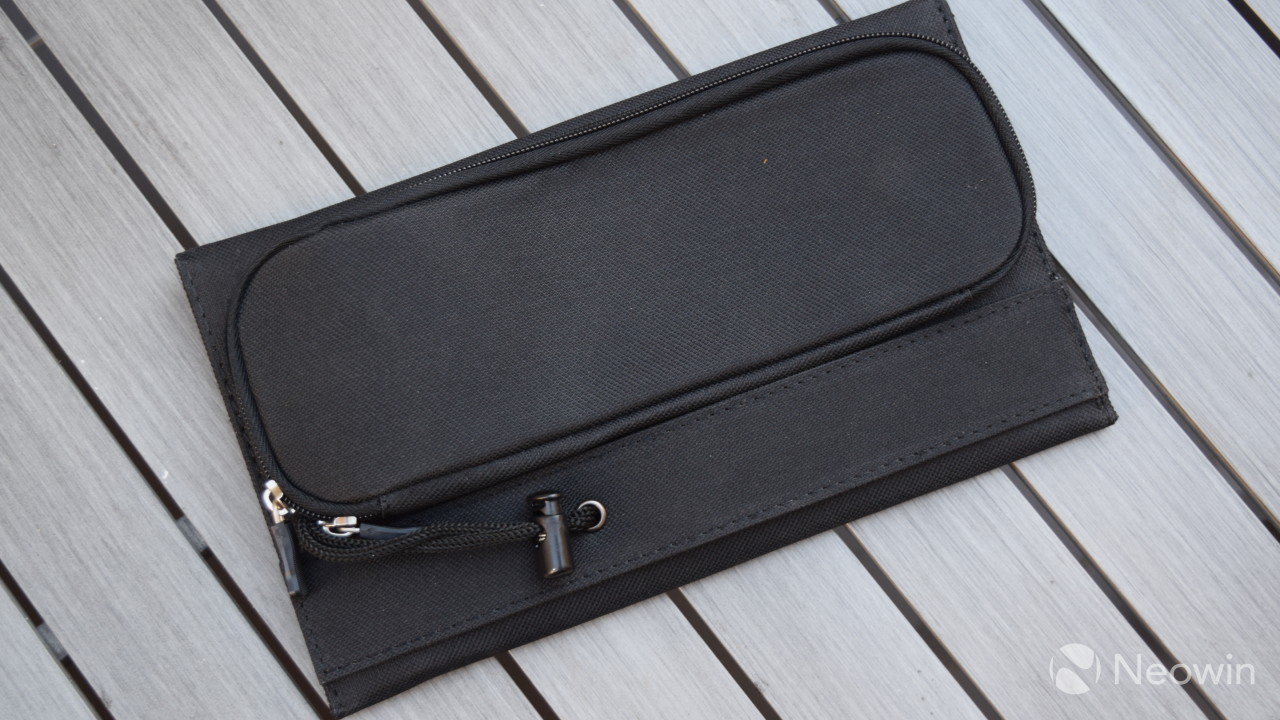 It is completely black in color, save for the white writing, and has two solar panels used for charging the device. It has an extendable stand with a drawstring that you can adjust, to tilt the power bank in the direction of the sun (or simply to get most of it off the floor); and four holes on the corners of the device allow you to strap it to your bag or hang it on a window in order to charge the device while you're on the go. 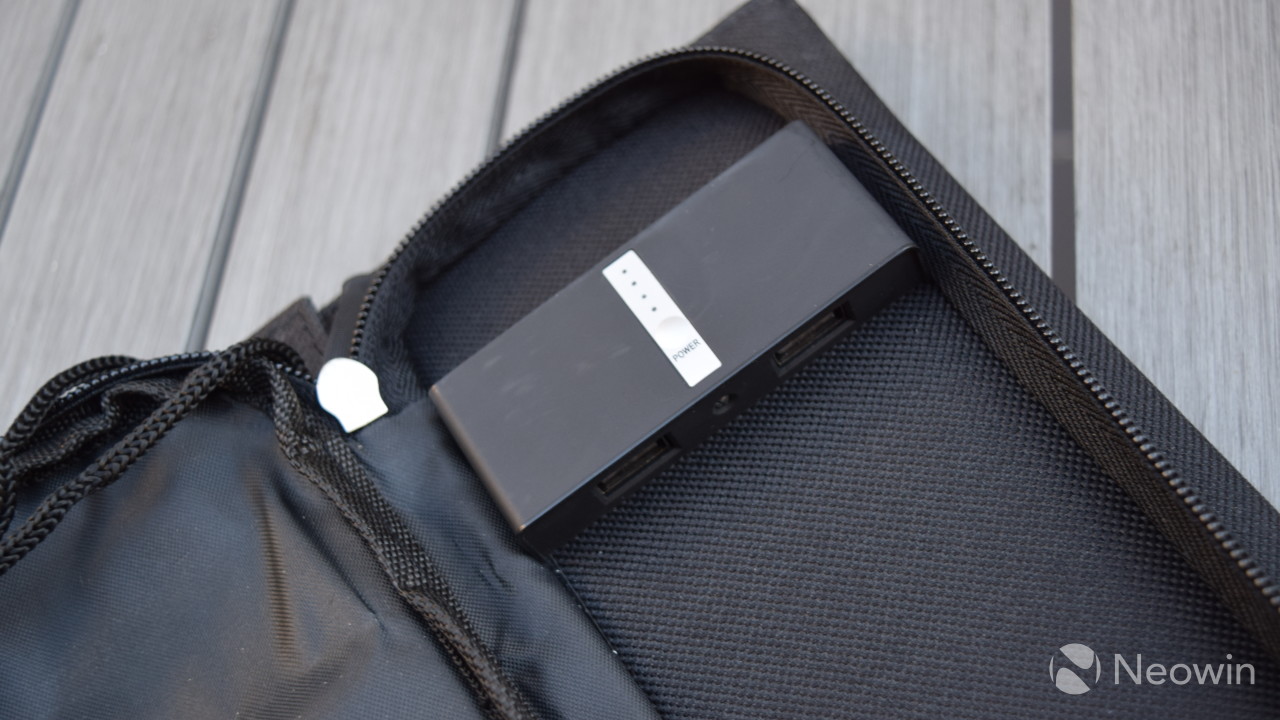 Unfortunately there isn't much waterproofing around the device, specifically in the aforementioned pouch, which would have been an inexpensive way to add significantly more value and durability to the power bank. It's currently rated at IP33, which basically means it's only shielded against light dust and water sprays. Personally I believe it can take a bit more than that - I put it through a bit more without any problems - but it could do with better shielding and protection. 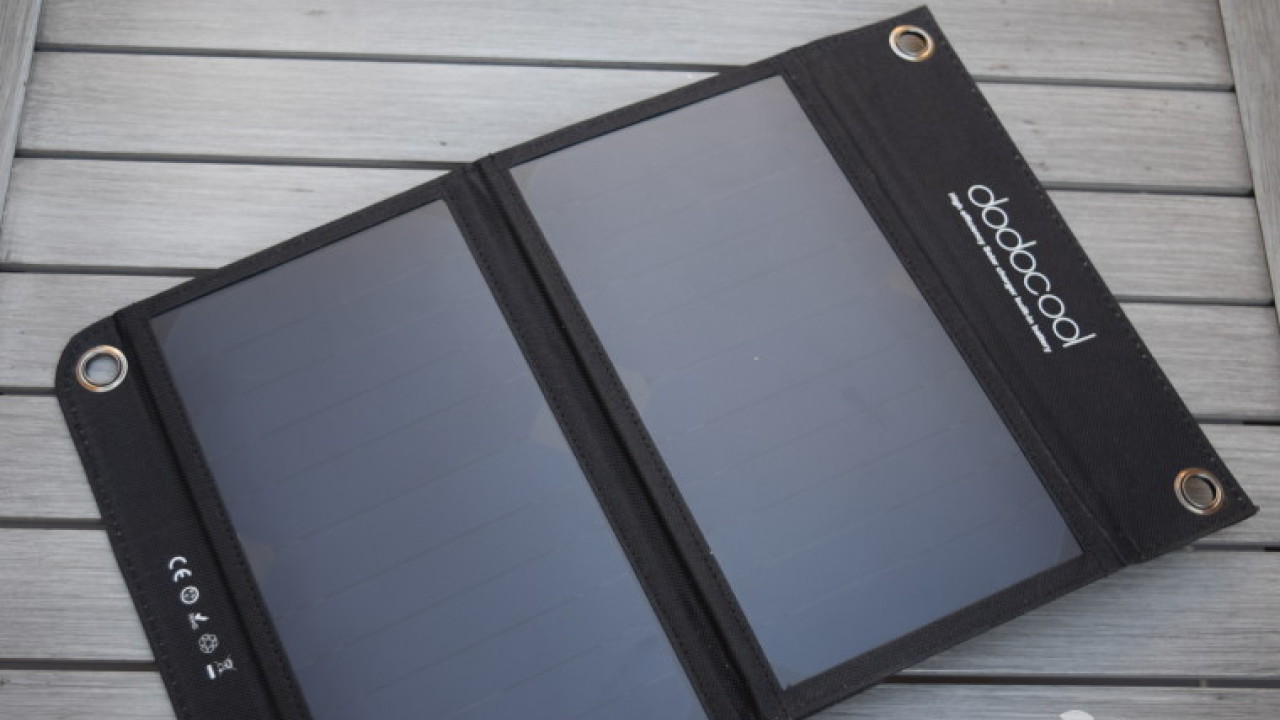 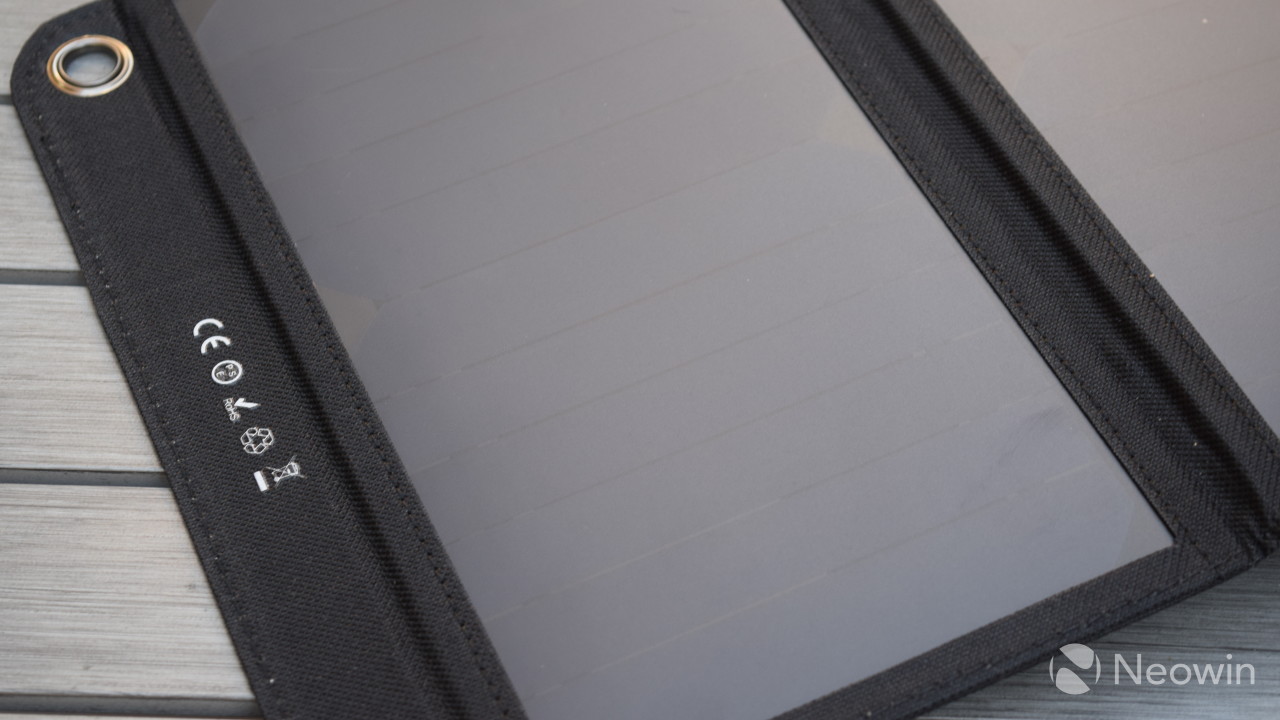 It charged itself as you'd expect any similar 2.1A/5V adapter to work, and it charged my devices just as quickly. I managed to charge a smartphone and a tablet simultaneously over several days and through multiple charge cycles, although when charging more than one device, the speed dropped dramatically (it has a maximum output of 10.5 W across both USB ports).

Charging the power bank was quite slow, however. Putting it out at around 8am in the harsh, rural sun of New South Wales, Australia, at the top of a hill in direct sunlight, took about five hours before it was fully recharged. It did however continue to charge in indirect sunlight, which was useful. 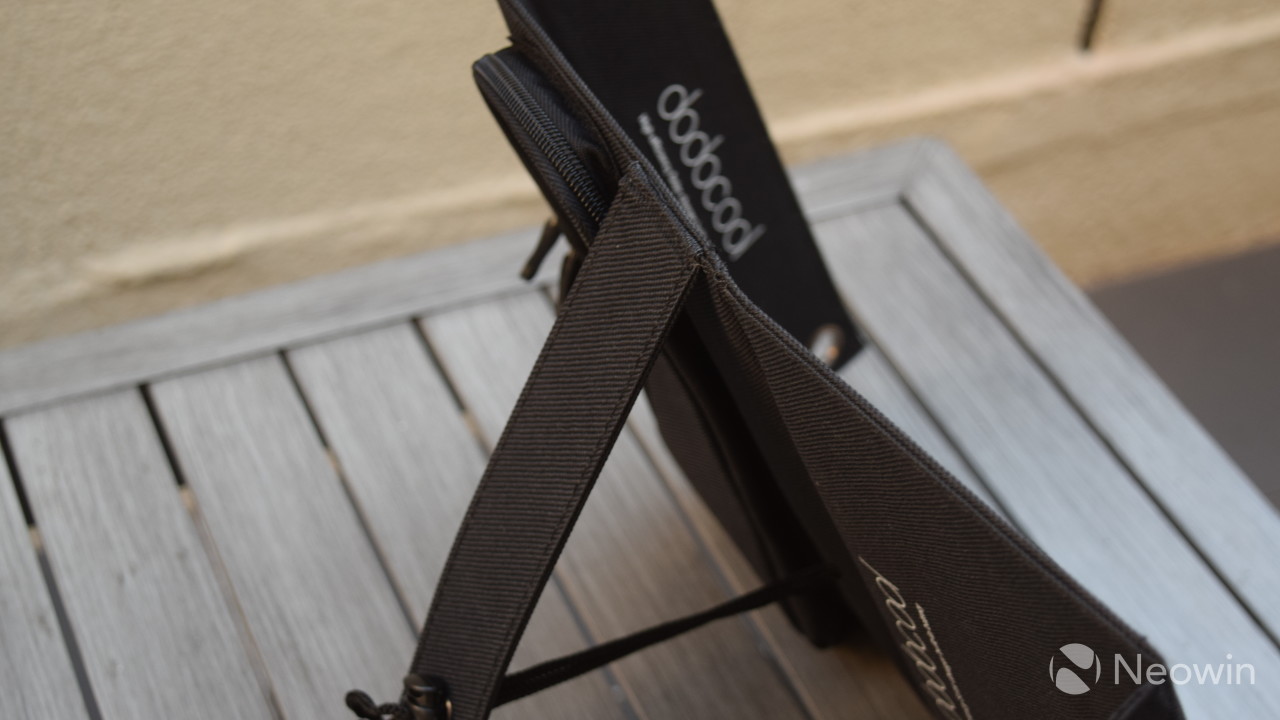 It was used to power a number of different devices such as lights and fans and it did it all effortlessly as you'd expect. The pouch it comes with was quite handy to store different cables for different things and being able to attach the power bank to the back of my bag came in quite handy when on the move.

The Dodocool 10,000mAh Portable Solar Charger was a great addition to the trip, and it wasn't just me that noticed it - other people I was with that had a chance to look at, play with and use the power bank to charge their devices were also really interested in getting one. It doesn't charge as quickly as a nonsolar power bank and it is a fair bit larger, but it's so incredibly handy to have and provides an extra layer of security - in the knowledge that you'll have a renewable power source that you can rely on for more than just a few charges - that it easily justifies the price. For those who go on extended rural trips, it would quickly pay itself off as you wouldn't have to turn on your generator as often. 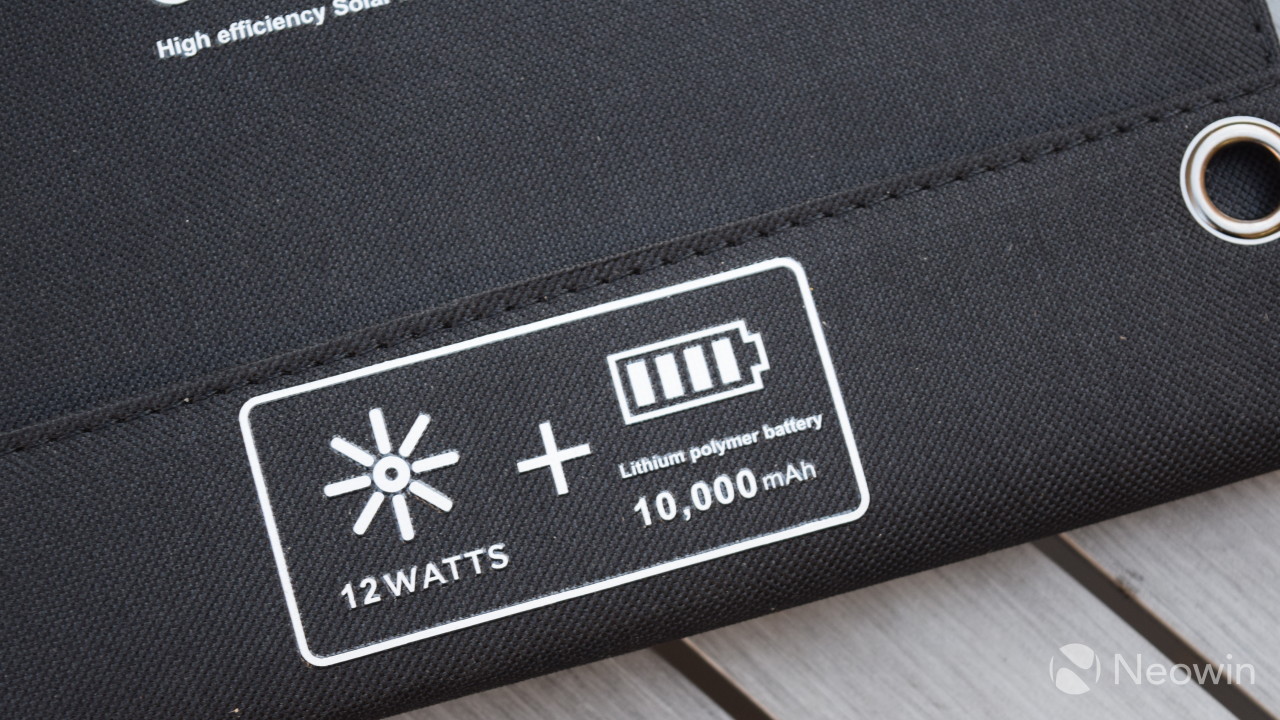 You can't charge it via a cable which is a missed opportunity - in some situations you may have access to another power source (such as a car or a generator) and may want to charge it using those methods more quickly instead of relying on the sun, but you're not given that opportunity. It would also have been so much better if it had an IP55 or superior rating for dust- and water-resistance, as it would likely appeal far more to the types of buyers that Dodocool is targeting with this device. This was the biggest flaw that it had.

It was, however, a pleasure to bring on the trip and even as it is, it didn't miss a beat - I can't really see myself in rural Australia without it or something like it.

Thanks to TomTop for providing the unit for review. If you'd like to pick up one of Dodocool's solar powered power banks, TomTop is currently selling them for $56.99 shipped to your front door.