This Weekend's PC Game Deals is where the hottest gaming deals are amassed into an easy to follow format, every week, from all over the internet. So kick back, relax and hold on to your wallets.

Considering that the GamesPlanet Summer Sale opened its doors on August 14, sadly, there is not much time left on the huge promotion.

The sale continues the old but familiar practice of daily deals that Steam abandoned some time ago, where a multitude of games are discounted past their 'regular' rates for a day. Today's daily deals include hit games such as Rainbow Six Siege, Metal Gear Solid V: The Phantom Pain, all the Borderlands games, and quite a lot more.

The good news is that while the sale is almost over, the store is hosting an encore sale tomorrow, on Sunday, bringing back each and every one of the daily deals that you may have missed for one last hurrah. 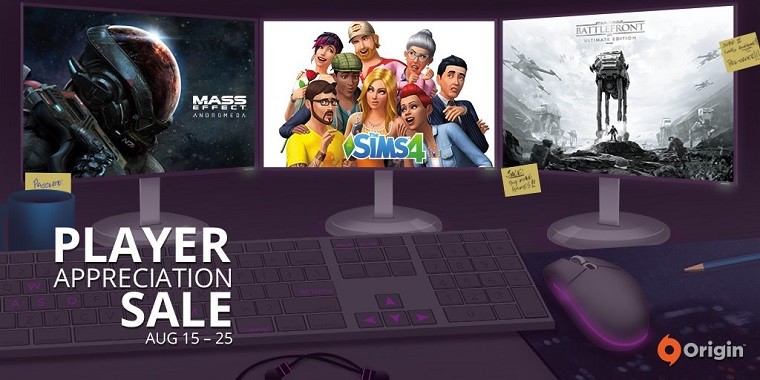 Sales on EA's Origin store have quickly become a familiar sight. This week, Origin introduced the 'Player Appreciation Sale', which will run its course until August 25.

While most of the deals are for EA published games, there are some outliers as well, such as games from CD Projekt RED, Paradox Interactive, Ubisoft, and some indie entries. We will have a more thorough list below in the Big Deals section, but, some highlights include Titanfall 2 ($19.99), Inside ($13.32), The Witcher 3 ($19.99), and its brilliant expansion pass ($16.66). The prices may differ depending on your region.

Of course, keep in mind that the Origin store does not give Steam keys for its purchases, with most of the games needing the Origin client to run them. Lastly, Origin Access members get an additional 10% discount on games and DLC available on the store, a welcome treat to have alongside the various games that the subscription service offers.

Returning from last week is the Bundle Stars Summer Sale, which is set to end on Monday, August 21, so remember to grab any deals you have been keeping an eye on before they come to a close. Similar to GamesPlanet, Bundle Stars also continue the tradition of daily deals, bringing forth a new selection of discounts every 24 hours.

The store still offers its Star Deal promotion that also refreshes every 24 hours with a brand new game at the helm, carrying a heavy discount. The current Star Deal on offer is Kingdom Rush Frontiers for $3.39.

Keep in mind that the discount code SUMMER10 can be applied on deals that are not part of any pre-orders, Star Deals or Bundles to get an additional 10% discount to the contents in your cart.

Arkane Studio's Prey reboot that released earlier this year is now equipped with a free trial. The trial includes the science fiction shooter's first hour of gameplay, and even lets you carry your progress over to the full version if you choose to purchase it. Thankfully, if you do think the game is worth your money, Bethesda is offering a 50% discount that will be available until August 29.

Pre-ordering games may be frowned upon by many these days, but it doesn't hurt looking at some great pre-order discounts. Below you can find deals for some highly-anticipated games that are coming up soon.

Wolfenstein II: The New Colossus - $47.99 on GamesPlanet: Following its reveal at E3 earlier in June, Wolfenstein II has quickly become one of the most highly-anticipated shooters to land this year. The game has BJ Blazkowicz returning to America with the goal of overthrowing the occupying Nazi forces. The game's season pass was recently revealed to have mini-campaigns with new protagonists.

XCOM 2: War of the Chosen - $32.75 at GameBillet: This expansion to last year's popular turn-based strategy game XCOM 2, brings along a whole host of new content such as brand new enemy types, ally factions, zombie-like mutated humans that attack anything in its path, and more. Firaxis even pushed out a demo for the game recently, that lets you try out the upcoming Photobooth mode to make your own propaganda posters.

Now, with all those pesky DRM filled games out of the way, let's take look at some DRM-free deals. This week, the GOG store is hosting a special event where you can purchase a 'pinata' for $3, and opening one will give you a random game worth at least $5.99.

Also, running alongside the pinatas is a traditional sale with plenty of well-known games discounted, and you can see some of them listed below.

And that is it for our pick of this weekend's PC game deals folks, and hopefully, some of you have enough self-restraint to not break the bank adding new games to your ever growing backlogs. Of course, there is a gargantuan amount of other deals available all over the interwebs if you search hard enough, so keep your eyes open for those as well.