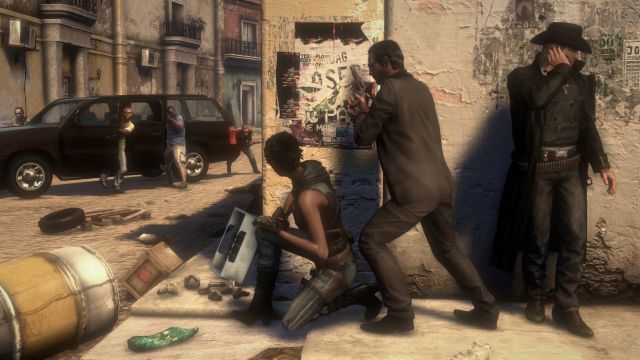 Yes, we are still very much stuck in a rut in terms of major new game releases. However we do have a couple of interesting new titles coming out in the coming week including a third game in a first person shooter series and a downloadable game that's already received a lot of hype.

Call of Juarez The Cartel - Developer Techland and publisher Ubisoft unleash this third game in the Western-themed first person shooter series for the Xbox 360 and PS3 consoles (a PC version will be released in September. This time the game switches time settings from the 19th century to the present day as modern "cowboys" go after the Mexican drug cartels. The game has already generated some controversy among real Mexican lawmakers who feel that the game makes light of the very real drug border wars in that country.

Bastion - Also due out this week for the Xbox Live Arcade platform is the debut title from developer Supergiant Games. Bastion is a 2D fantasy action-RPG  with an anime-based art style. As usual your hero character has to save the game's fantasy world from a massive disaster. Bastion is supposed to be more of an action game than an RPG title with player skills needed to defeat foes in combat. The game will be released for the PC later in 2011.

Also due out this week is the latest movie-to-game adaptation, Captain America: Super Soldier, for various console platforms. Paradox Interactive has the global strategy game Supreme Ruler Cold War due for release for the PC this week.  Finally the third DLC pack for the post apocalypse RPG Fallout New Vegas, Old World Blues, is due to come out this week for the PC, Xbox 360 and PS3 platforms.