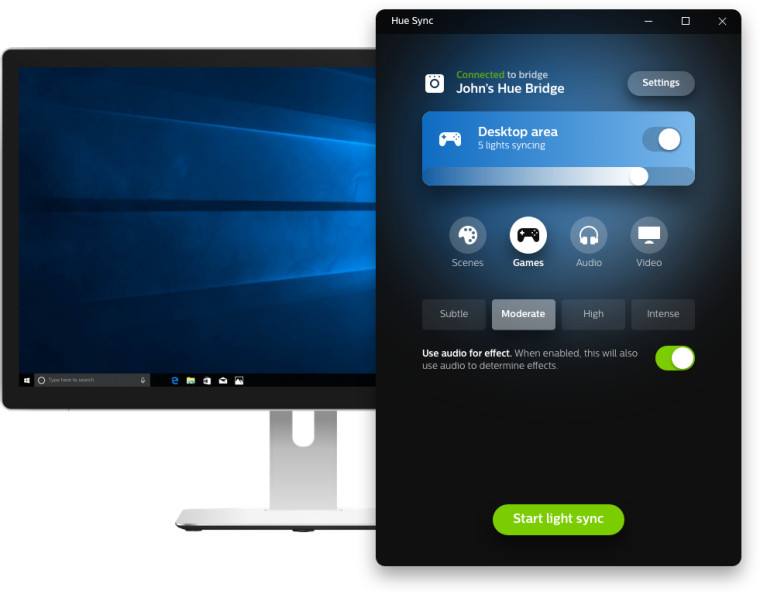 Things have certainly been moving at a brisk pace for the folks over at Philips Lighting (now, Signify) - after releasing a major update to the Hue app just a few days ago, they’re back at it again, this time, with the new Hue Sync app, released today for both Windows and macOS.

Originally announced at CES back in January, Hue Sync analyzes on-screen content and synchronizes Hue lights to create an immersive scene in real-time. Philips has been experimenting with this concept for a long time, starting with its Ambilight-enabled TVs, which also projected the colors in the scene onto the wall behind it.

Hue Sync is easy to configure – simply fire up the app, connect to a Hue bridge, set up an ‘Entertainment area’ (defined in the new Hue app), and you’re good to go. The app includes support for scenes, as well as games, audio, and video modes. You can match the effects to react to music, which the app analyzes to create an on-the-fly lightscript in real-time. You can also adjust the intensity of the effects from within the app to tailor your lighting experience. The experience is not just limited to the PC or Mac and can be extended to the living room, by streaming content to your TV via HDMI, AirPlay, Chromecast or Miracast. Hue Sync supports Hue’s entire ecosystem of products, including light strips, bulbs, and floor/desk lamps, which is great for experimenting.

While this functionality was available via unofficial third-party apps such as ScreenBloom previously, it’s great to finally have an official app from Philips as well.